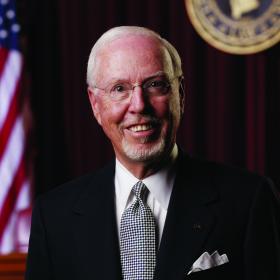 Dean Emeritus Andrew M. Coats was appointed as the Eleventh Dean of the College of Law and Sixth Director of the Law Center on April 25, 1996, and served in that role through June 30, 2010 when he became a full time professor. Prior to his appointment at The University of Oklahoma, he was a senior trial partner in the Oklahoma Law Firm of Crowe & Dunlevy.

During his tenure, Dean Coats, a 2005 inductee into the Oklahoma Hall of Fame, led a resurgence of the College of Law, overseeing the College’s Centennial Celebration and significant increases both in endowed professorships and scholarships. In perhaps his most substantial impact on the College of Law, he presided over the College’s 1999-2002 Renovation and Construction Project, which, at its completion, saw the University of Oklahoma Regents recognize his leadership by officially renaming the building Andrew M. Coats Hall in his honor.

Dean Coats was the 2010 recipient of the Professionalism Award from the United States Court of Appeals for the 10th Circuit. This award, only given every two years, is presented to the person from the six states that comprise the 10th Circuit who represents the “Best of Our Profession,” as chosen by the Circuit’s Judges.

His legal career is highlighted by successfully arguing before the US Supreme Court for the Universities of Oklahoma and Georgia in their landmark case against the National Collegiate Athletic Association (NCAA) which broke the NCAA's college football TV monopoly. As District Attorney of Oklahoma County, he prosecuted a number of important cases, including capital cases such as the "Sirloin Stockade Murders."

From 1957-1960 Dean Coats served as an officer in the United States Navy working as an advisor to the Chinese Nationalist Government in Taiwan.

Inductee into the Oklahoma Hall of Fame, 2005

Selected by Oklahoma City University as the Outstanding Lawyer in Oklahoma, 1982

American Board of Trial Advocates

Trustee of the US Supreme Court Historical Society

Fellow of the International Academy of Trial Lawyers