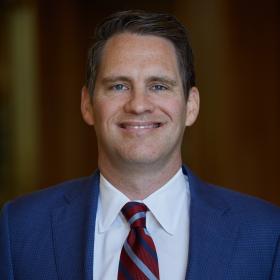 Dean Dishman joined the University of Oklahoma College of Law as Assistant Dean of Student Affairs in 2017.

Dean Dishman first came to the College of Law as part of the U.S. Air Force’s legal education program, graduating in 2005. He began his legal career on Active Duty in the U.S. Air Force, serving as a prosecutor, defense counsel, tort claims officer and medical law consultant.

Dean Dishman is a National Institute of Trial Advocacy (NITA) trained trial advocacy instructor, and is a regular lecturer at military law courses across the globe. He is a 2017 graduate of the U.S. Air Force’s Air War College at Maxwell Air Force Base, Alabama. In his reserve capacity, he is currently assigned to United States Africa Command in Stuttgart, Germany, and holds the rank of Lieutenant Colonel.