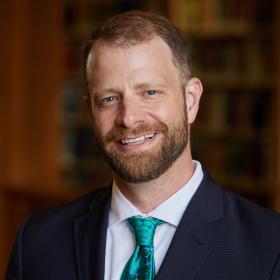 Eric E. Johnson is the Earl Sneed Centennial Professor of Law at the University of Oklahoma College of Law. His courses include Torts, Science and Law, Antitrust, and Intellectual Property. Professor Johnson’s research concentrates on intellectual property and on science and risk, with publications including the Washington Post, the Northwestern University Law Review, the Boston University Law Review, the University of Illinois Law Review, and New Scientist magazine. His work was selected for the Yale/Stanford/Harvard Junior Faculty Forum in 2013. And Johnson is the author of Torts: Cases & Context, a free and open-source casebook on tort law. Before coming to OU, Johnson was on the faculty at the University of North Dakota School of Law where he was twice selected by students as the keynote speaker for UND Law’s graduation banquet, and where he was selected by the Class of 2018 to give the Commencement Address with Kit Johnson. Before his academic career, Johnson was a litigation associate at Irell & Manella in Los Angeles, where he worked on intellectual property and general commercial matters. His clients included Paramount, MTV, CBS, Touchstone, Immersion Corporation, and the bankruptcy estate of eToys.com. After working at Irell, Johnson was an in-house attorney at Fox Cable Networks, negotiating and drafting deals for the Fox Sports cable networks. Johnson received his J.D. cum laude from Harvard Law School in 2000, where he was an instructor for the first-year course in legal reasoning and argument. He received his B.A. with highest honors and special honors from the Plan II Honors program at the University of Texas at Austin. Johnson archives course materials on his website, and his online exam archive includes dozens of essay exams and more than 150 multiple-choice questions.

Disentangling the Right of Publicity

The Economics and Sociality of Sharing Intellectual Property Rights

Intellectual Property and the Incentive Fallacy

A Populist Manifesto for Learning the Law

The NFL, Intellectual Property, and the Conquest of Sports Media

The Black Hole Case: The Injunction Against the End of the World