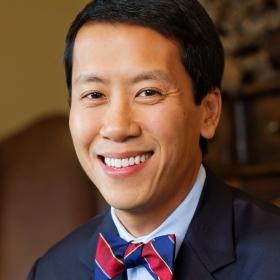 Professor Joseph Thai teaches and writes about the Constitution and the Supreme Court.

Professor Thai has served as law clerk to Justice John Paul Stevens and Justice Byron White of the Supreme Court, as well as Judge David Ebel of the Tenth Circuit Court of Appeals.

He frequently engages in pro bono litigation in the areas of civil rights, criminal law, and constitutional law.  He served on the legal team that successfully challenged Oklahoma’s same-sex marriage ban in 2014, a year before the Supreme Court upheld marriage equality on a nationwide basis.

Mark Zuckerberg Still Decides What Users Can Say on Facebook

Facebook’s Speech Code and Policies: How They Suppress Speech and Distort Democratic Deliberation

Justice Stevens: A Habit of Understanding Before Disagreeing

The Right to Receive Foreign Speech

FIRST FREEDOMS: A MULTIMEDIA TEXTBOOK ON THE FIRST AMENDMENT

Regulating Drones under the First and Fourth Amendments

Obergefell v. Hodges: A Note to Future Self

CONSTITUTIONAL RESTRAINTS ON POLICING: A MULTIMEDIA TEXTBOOK ON CRIMINAL PROCEDURE

A Race to Execute

A Justice of the Greatest Generation

The Case for Oral Argument in the Supreme Court of Oklahoma

ENCYCLOPEDIA OF THE SUPREME COURT OF THE UNITED STATES

A Wild Pitch on Eavesdropping

Is Data Mining Ever a Search Under Justice Stevens's Fourth Amendment