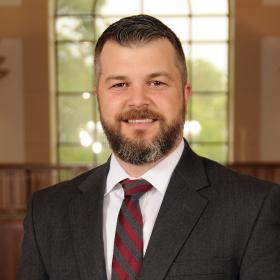 Kenton Brice joined the Law Library in 2015 as its first Digital Resources Librarian. In addition to teaching legal research in the Legal Research, Writing, and Advocacy Program, Kenton also assists in administering the Digital Initiative at the College of Law.

Prior to joining the College of Law, Kenton practiced as an associate attorney with the firm, Christman Kelley & Clarke, PC, where he gained extensive experience in the trial and appellate courtrooms and the boardroom, handling various litigation and transaction matters for the firm. During his short practice, Kenton earned honors as the Texas Appellate Lawyer of the Week by Texas Lawyer magazine for successfully appealing a case to the U.S. Court of Appeals for the Fifth Circuit as well as becoming a member of the Texas Bar Association's Pro Bono College for serving on the board of directors and executive committee for the nonprofit, Serve Denton. In addition to his legal work, Kenton administered all of the firm's technology to enhance the firm's efficiency in all aspects of professional and legal work. He brings his professional and technical experiences to the College of Law to help educate students on how to utilize technology to become more effective researchers, lawyers, and professionals.

Kenton graduated from the University of Oklahoma College of Law in 2009, where he was involved as a class officer and on the Board of Advocates. In addition, Kenton participated on the Jessup International Moot Court Team, earning honors as a top ten speaker and induction into the prestigious National Order of Barristers. Kenton received his undergraduate degree in business from Northeastern State University, where he was involved in student government and was a founding member of the NSU Rugby Team and his Masters of Science - Library Science degree from the University of North Texas.