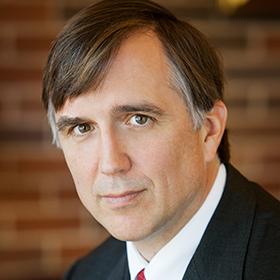 Professor Lindsay G. Robertson joined the law faculty in 1997.  He teaches courses in Federal Indian Law, Comparative and International Indigenous Peoples Law, Constitutional Law and Legal History and serves as Faculty Director of the Center for the Study of American Indian Law and Policy and Founding Director of the International Human Rights Law Clinic.

Professor Robertson was Private Sector Advisor to the U.S. Department of State delegations to the Working Groups on the U.N. Declaration of the Rights of Indigenous Peoples (2004-06) and the American Declaration on the Rights of Indigenous Peoples (2004-07) and from 2010-12 was a member of the U.S Department of State Advisory Committee on International Law.  In 2014, he served as advisor on indigenous peoples law to the Chair of the U.N. Committee on the Elimination of Racial Discrimination.  He has spoken widely on international and comparative indigenous peoples law issues in the United States, Europe, Latin America and Asia.

In 2014, he was the recipient of the first David L. Boren Award for Outstanding Global Engagement.  He is an elected member of the American Law Institute and the American Bar Foundation and serves as a justice on the Supreme Court of the Cheyenne and Arapaho Tribes.  Professor Robertson is the author of Conquest by Law (Oxford University Press 2005).

Member of the American Law Institute

Justice on the Supreme Court of Cheyenne and Arapaho Tribes