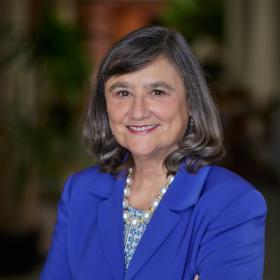 Professor Mary Sue Backus joined the law faculty in 2004 after a semester as a Visiting Assistant Professor of Law at William and Mary School of Law, where she taught Evidence and a seminar on indigent defense systems.

Professor Backus, who graduated first in her class at William and Mary, was selected as a member of Order of the Coif and the Order of the Barristers. She served as Senior Notes Editor of the William and Mary Law Review, on the staff of the William and Mary Bill of Rights Journal, and competed on the National Moot Court Team. Backus received the Margaret Thatcher Prize for Excellence in Graduate Studies, awarded by the College to the outstanding graduate student, and the Lawrence W. I'Anson Award, awarded by the law faculty.

Professor Backus began her legal career as a law clerk to the Honorable H. Emory Widener on the United States Court of Appeals, Fourth Circuit. Following her clerkship, Backus joined the Washington, D.C. firm of Covington and Burling where she handled product liability litigation and regulatory matters. In addition, Backus provided pro bono assistance on custody and education matters and systemic reform of indigent defense systems.

Professor Backus is a member of the Virginia Bar and the District of Columbia Bar and currently teaches Criminal Law, Education Law and Evidence. From 2004-07, she served as a Co-Reporter for the National Committee on the Right to Counsel, a bipartisan group reviewing the indigent defense system throughout the nation and creating consensus recommendations for reform. Backus also serves on the board of directors for Oklahoma Close Up, a nonpartisan, nonprofit citizenship education program for high school students.

Order of the Barristers

Member of the Virginia Bar

Member of the District of Columbia Bar

Oklahoma Close Up Board of Directors