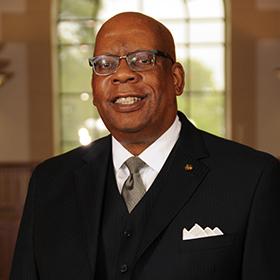 Stanley Evans assumed the position of Dean of Students at the University of Oklahoma College of Law in August of 2003; immediately after his law school graduation.  His selection for this position was unprecedented in two ways.
1.     It almost unheard of for a person to be a student one year, and be the Assistant Dean responsible for all student related actions and activities the following year.
2.     Dean Evans is the first African American to be appointed to a Dean position at any law school in the state of Oklahoma.

Although he retired from OU Law in 2012, he has continued to help students, alums and the College as a counselor, advisor, and recruiter.

Almost immediately, upon his assumption as Dean of Students, positive changes were seen at the College of Law.

As Chairman of the Oklahoma Human Rights Commission, Dean Evans energized the entire state on Human Rights awareness and sought recognition for people who have been giants in this important area.  He provided leadership to the commission and the two state investigative offices.

Evans currently serves as the Chairman of the OBA’s Military and Veteran’s Section and is one of the lead volunteers in the Oklahoma Lawyers for America’s Heroes Program which provides free legal services to Oklahoma soldiers, veterans, and their families.  He is also the chief legal coordinator for Oklahoma City’s MAKE-A-WILL and Family Financial Counseling Programs.  Over the past 6 years, through the use of volunteer attorneys, law students from both OU & OCU, and Legal Aid of Oklahoma, over 500 families now have the tools to pass wealth from one generation to the next and have been assisted with family finances.  For these two projects and his mentoring of Oklahoma young lawyers and law students, he received the OBA Pro Bono Person of the Year in 2011, the OBA’s Diversity Award in 2013, and two Oklahoma Governor’s Commendations.  His work on these community projects and others continues.

In 2006, Dean Evans wrote an article My Thoughts on Law School and on Becoming A Lawyer, which was published in The African American Law School Survival Guide.   He has made CLE and professional presentations to OBA entities and firms on Diversity – Recruit, Retain, and Advance.

Evans is a Viet-Nam War Veteran.  He spent 32 years on active duty service in the U.S. Army rising to the rank of Colonel.

He and his wife of 48 years (Saundra) have two children (Lisa & Stan II).  It was the loss of their oldest child, Lisa, in 1997 that caused a change of direction in their lives.  Lisa at 26 years old was a former OKC TV News award winning anchor (Lee Evans).  She was killed by a drinking driver.  The Evans, accepted God’s plan, then determined that the rest of their lives would be devoted to helping others create a vision of success; and in guiding people to become the best they can be.