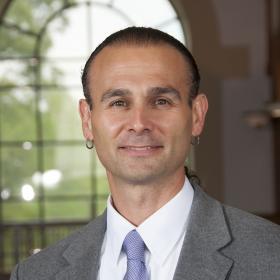 In 2001 Taiawagi Helton joined the faculty of the University of Oklahoma College of Law, where he teaches environmental law, property law, and Indian law.  His research emphasizes environmental and natural resources issues relating to Native Americans, as well as nation building in Indian country.

Helton began his legal career as a clerk for the Honorable Robert H. Henry, U.S. Court of Appeals for the Tenth Circuit.  He has served as a Special Justice for the Cheyenne and Arapaho Tribes Supreme Court (2004-2008) and as a member of the Board of Directors of Oklahoma Indian Legal Services. In 2012, Helton received the O.U. Regents’ Award for Superior Teaching, the University’s highest award for teaching excellence.

Helton earned his Master of Laws degree from Yale Law School in 2001.  In 1999 he received a juris doctor degree with highest honors from the University of Tulsa College of Law, where he served as Editor-in-Chief of the Tulsa Law Journal and earned membership in the Order of the Curule Chair.