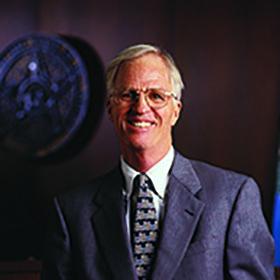 Admitted to the Oklahoma Bar Association in 1964, Roberts has served as a member of the Board of Governors of the association and has served on various committees, including the Legal Ethics Committee, Mandatory Legal Education Committee, currently the Civil Procedures and Evidence Code Committee, and the Bench and Bar Committee. He is a member and chair of the Advisory Board to the Oklahoma Supreme Court on Alternate Dispute Resolutions. He was active in the Law School Admissions Council and served as chair of the Misconduct and Irregularities Committee and Audit Committee, and as a member of the Board of Trustees. He retired as municipal judge for the City of Norman after serving 38 years..

Roberts has served on the faculty of the National Institute for Trial Advocacy in the Southern Regional and Florida Regional programs, the National program and the Advanced Litigation Program. He is a member of the American Inns of Court XXIII and has served as Program Chair and President.

He was awarded Edith Kinney Gaylord Presidential Professor of Law. He has served on many university and law school committees at the University of Oklahoma during the 38 years he was teaching full time.