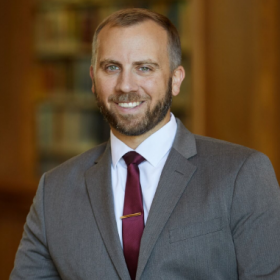 Zachary Schmook joined the University of Oklahoma College of Law faculty in Fall 2017 as an Assistant Professor in the Legal Research & Writing Program.

Prior to joining the College of Law, Professor Schmook served as the Deputy Director and Managing Attorney for the Metropolitan St. Louis Equal Housing and Opportunity Council (EHOC), a nonprofit dedicated to ending housing discrimination. His work with EHOC included representation of the organization and individual clients before state and federal trial and appellate courts, as well as in administrative actions with the U.S. Department of Housing and Urban Development and state administrative agencies.

Professor Schmook has previously worked with the Washington University College of Law as an Adjunct Professor -- teaching Mediation and Legal Writing -- and a Clinical Supervisor for the Civil Rights and Community Justice Clinic.

Professor Schmook received his J.D. from Washington University in St. Louis and is admitted to practice law in Missouri (inactive) and Illinois, as well as federal courts in the Eastern District of Missouri and the Southern District of Illinois. Professor Schmook is a member of the Missouri Commission on Human Rights Advisory Board, the National Housing Law Project, and the Reserve Officers Association. In addition to his work at OU, Zack serves in the U.S. Army Reserve as a Medical Operations Officer.

Welcome to the Village: An Analysis of How St. Louis County Occupancy Permit Schemes Perpetuate Segregation and Violate the Constitution