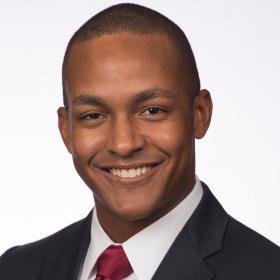 “I am honored to have such an incredible opportunity with the Supreme Court and the United States Sentencing Commission,” said Merchant. “I hope to add value to the Fellows program based on my life experiences, and to learn as much as possible to further inform my perspectives.”

As a Supreme Court Fellow, Merchant has been assigned to the United States Sentencing Commission, which engages in policy analysis of crime and punishment at the national level and uses the results in the development of federal sentencing guidelines. As part of his duties, Merchant will produce a work of scholarship for publication on a topic of criminal or sentencing law and will present it to U.S. judges.

“I struggle to think of many issues that are more important than how and why a society sentences its members who violate the law,” said Merchant. He concentrated on ethics and morality in both undergraduate and law school and thinks that the U.S. Sentencing Commission is the perfect fit for his strengths and interests.

Merchant will join the Supreme Court Fellows Program this September from the United States District Court for the Western District of Oklahoma, where he clerked for the Honorable Jodi W. Dishman.

“I am incredibly proud of Mr. Merchant being selected to the prestigious Supreme Court Fellows Program. His selection is a testament to his passion for service and work ethic. I know he will represent the federal judiciary and Oklahoma well,” stated Judge Dishman.

Prior to his clerkship with Dishman, Merchant also worked in private practice as a litigation attorney and was an Adjunct Professor at OU Law. He also currently serves as the chair of the Oklahoma City Board of Adjustment and is on the board of directors and government relations chair for the Federal Bar Association.

“This is a great honor for Sam, but they’re also lucky to have him,” said Associate Dean Steven Gensler, who served as a Supreme Court Fellow in 2003-2004. “Sam is a terrific lawyer and a dedicated public servant. We are thrilled for Sam and know that his promising future has only just begun.”