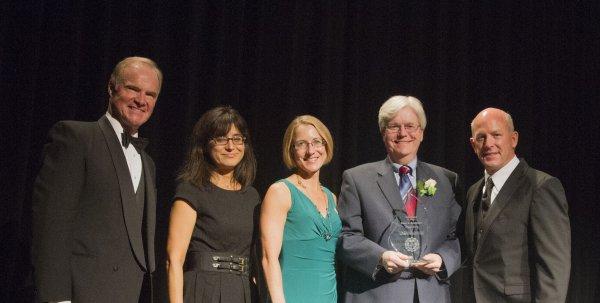 Professor Owen Anderson, the Eugene Kuntz Chair of Law in Oil, Gas and Natural Resources at the University of Oklahoma College of Law, was recently recognized as an outstanding alumni of the University of North Dakota at the school’s Homecoming.

Anderson was named a recipient of the Sioux Award, the highest honor given by the UND Alumni Association and Foundation. At the ceremony in Grand Forks, N.D., organizers pointed out that Anderson is recognized as an expert in international petroleum transactional law. At OU Law, Anderson is also the George Lynn Cross Research Professor, and Director of the John B. Turner LL.M. Program in Energy, Natural Resources and Indigenous Peoples Law. He has authored several books, over 100 articles, and regularly teaches and lectures throughout the world on petroleum law and transactions.

Anderson earned a B.A. in 1971 and a J.D. in 1974 from UND. After graduating from law school, he worked for the Office of the North Dakota Attorney General, the State Land Department and North Dakota Industrial (Oil & Gas Conservation) Commission. In 1979, he began his teaching career at the University of North Dakota College of Law. He later accepted an endowed professorship at Texas Tech University before accepting a position at OU in 1992.

In the article in UND’s alumni magazine, Anderson said receiving the Sioux Award is one of the highlights of his career, while his greatest professional accomplishment is helping law students realize their career ambitions. “I'm always very, very pleased when things turn out the way the students wanted them to turn out,” Anderson said.