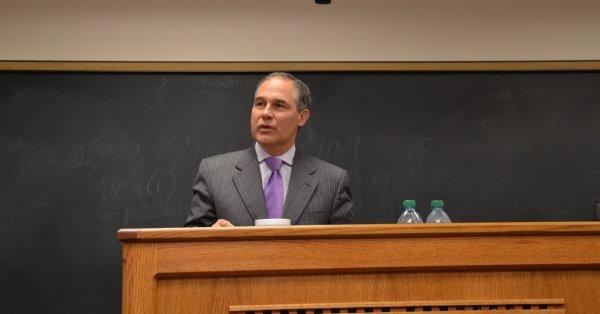 Oklahoma Attorney General Scott Pruitt visited OU Law this week to help educate students and generate some interest in working for his office. As the featured guest at Wednesday’s “Lunch and Learn,” Pruitt, who was co-owner and managing general partner of the Oklahoma City Redhawks Triple-A baseball team from 2003 to 2010, opened with a “pitch.”

“I’m here today like a general manager, scouting for new talent,” Pruitt said. "We’re hiring and we want you to consider being part of our team at the Attorney General’s office.”

In the lecture, which was attended by about 90 OU Law students, Pruitt described how valuable recent OU Law graduates have been in a number of high-profile cases. One example he gave is the battle against abuses in the foreclosure process where homeowners have become victims of fraud. Pruitt said all 49 other states accepted a settlement that resulted in affected residents recovering an average of $1,400. Oklahoma did not accept the deal and negotiated its own agreement.

“Under our settlement, people are getting an average of about $11,000,” Pruitt said.

The Attorney General also spent several minutes explaining the State of Oklahoma’s dispute with the federal government over the Affordable Care Act, commonly called “Obamacare.” He described being at the U.S. Supreme Court, watching the justices hear arguments for and against the law for three days, and called it a fascinating experience.

Before being elected Attorney General in 2010, Pruitt served Broken Arrow, Coweta and Tulsa in the Oklahoma State Senate for eight years, four of those as Assistant Republican Floor Leader.