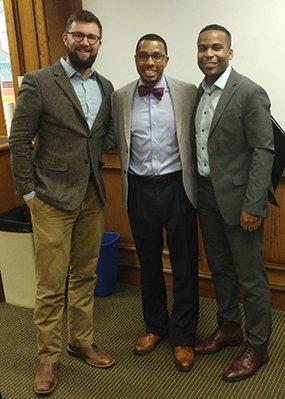 The Black Law Student Association (BLSA) and the Business Law Society (BLS) recently hosted OU Law alumnus Christopher Staine ('10), an associate at Crowe & Dunlevy who specializes in Bankruptcy and Creditor’s Rights. In 2015, Staine was selected to join the National Black Lawyers – Top 100 Lawyers. Membership is limited to a select few of the most qualified attorneys from each state who exemplify superior qualifications of leadership, reputation, influence, stature, and profile as lawyers practicing in designated aspects of the law.
“Chris is a distinguished attorney and good friend," said BLSA President Stan West. "He offered great insight and addressed some good questions from members of both organizations."
During his time at OU Law, Staine served as BLSA President and still remains very active in the chapter. In fact, just last month he was inducted into the Class of 2017 Hall of Fame and named SWBLSA Alumni of the Year. After describing the challenges he faces in his practice, he opened the floor to Q&A and engaged with students directly.
“Chris provided great advice and information today," said BLS 1L Representative Rob Jackson. "It was very interesting to hear about his journey to the bankruptcy field. I have often been told to keep an open mind when it comes to firm placement, and his example shows that where ever a lawyer is placed, they can find a career they love and excel in at the end of the day."
BLSA, BLS, Guest Speakers

University of Oklahoma College of Law students will provide free legal assistance to veterans during a pop-up clinic, scheduled for 9 a.m. to noon Thursday, Feb. 20, at the Norman Veterans Center, 1776 E. Robinson St.

The University of Oklahoma College of Law has been recognized for a second time as an Apple Distinguished School, acknowledging the college’s comprehensive effort to educate and prepare law students to become technologically competent attorneys. 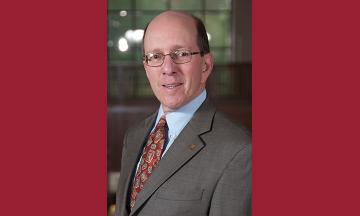 OU Law Professor Jonathan Barry Forman has been named co-chair of the Retirement Income Institute, a recently established program of the Alliance for Lifetime Income.