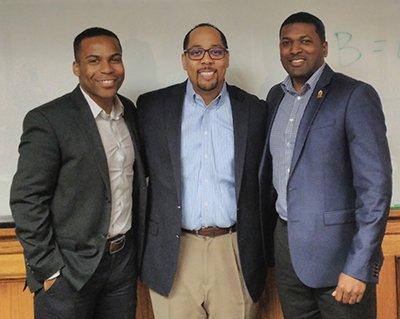 Last month, OU Law's Black Law Student Assocation (BLSA) invited a pair of Oklahoma judges to discuss their thoughts on Black History Month. On Thursday, February 23, Judge David Lewis of the Oklahoma Court of Criminal Appeals came and engaged in great discussion with students. The next day, Judge Bernard Jones of the Western District of Oklahoma did the same.
"I consider both of these judges mentors, but also good friends," said BLSA President Stan West. "They are certainly among those who have paved the way for us to have the opportunities we have today, and they offered great insight to our student body."
Judge Lewis is an OU Law graduate who has been sitting on the Oklahoma Court of Criminal Appeals for almost 12 years, and is the first African-American to serve on that court. He was recently inducted into the SWBLSA Hall of Fame for his contributions to BLSA, and will be honored at the Order of the Owl Ceremony on March 6.
Judge Jones is a graduate of Notre Dame Law and has been sitting as a federal magistrate since July 2015. With his appointment, he became the first African-American in the state of Oklahoma, and only the second African-American in the six-state 10th Circuit to serve in this capacity. Among other honors, he has been recognized as an African American History Maker by Southern Methodist University and was the judicial recipient of the Oklahoma Bar Association's Ada Lois Sipuel Fisher Diversity Award in 2016.
BLSA, Black History Month, Guest Speakers