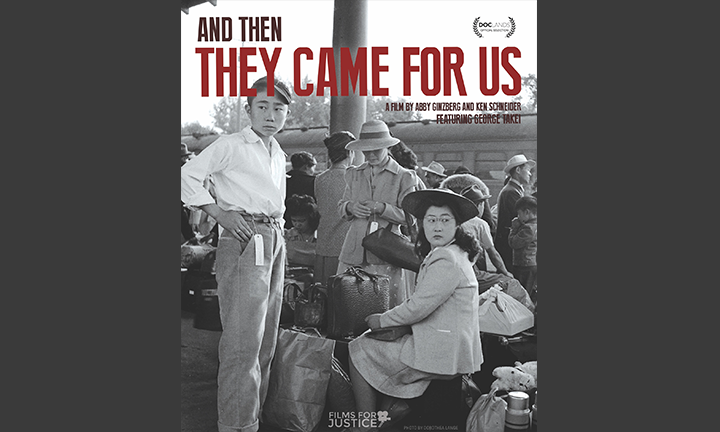 NORMAN, OKLA. – The University of Oklahoma College of Law on Monday will present a screening of the award-winning documentary, “And Then They Came for Us,” which chronicles the forced incarceration of Japanese Americans during World War II. The film features the stories of many who were imprisoned, including Fred Korematsu, who resisted the government’s detainment order and challenged its constitutionality, which the U.S. Supreme Court infamously upheld.

The event will be held Monday, Oct. 7, in the Dick Bell Courtroom at OU Law. The documentary will be shown at 5:30 p.m. after opening remarks from OU Interim President Joseph Harroz Jr.

Following the screening, a panel discussion at approximately 6:45 p.m. will feature:

The discussion will be moderated by Joseph Thai, Presidential Professor of Law and Glenn R. Watson Centennial Chair in Law, OU College of Law. The panel will reflect on the relevance of this grave historical episode of racial injustice to our state – where Japanese Americans were detained at Fort Sill, and Native Americans before them – and to our times.

“Educating our students on the lessons of history – and the sometimes imperfect path of the law – is a crucial component of how we prepare them to become future guardians of the Constitution,” said OU Law Interim Dean Katheleen Guzman. “We are honored to host Dr. Korematsu and Mr. Tamaki, who, along with members of our faculty, will engage our students and the wider community on how the issues of profiling marginalized populations – and speaking out against injustice – are just as important today as they were then.”

The saga of Fred Korematsu’s case began on Feb. 19, 1942, when President Franklin D. Roosevelt signed Executive Order 9066, which authorized what was to become the mass forced removal and incarceration of all Japanese Americans on the West Coast. Fred Korematsu refused to obey the order and was arrested and convicted. In 1944, he appealed his case to the U.S. Supreme Court, which ruled against him, deferring to the government’s false claim that the wholesale incarceration of Japanese Americans was justified due to military necessity. His conviction was eventually vacated in 1983, and he remained a civil rights activist throughout his life. In 1998, he received the Presidential Medal of Freedom, the nation’s highest civilian honor. Fred Korematsu died March 30, 2005, at the age of 86.

The screening and panel discussion are co-sponsored by the OU Law student organizations the American Constitution Society, the Asian Pacific Law Students Association and the Native American Law Students Association. It is funded in part through the generous support of the OU Office of Diversity and Inclusion, the OU Division of Student Affairs, the Calvert Chair of Law and Liberty, the Watson Centennial Chair in Law and the American Constitution Society.

“And Then They Came for Us” was released in 2017 and is directed by Abby Ginzberg and Ken Schneider. The film’s honors include the Accolade Global Film 2017 Humanitarian Award, the American Bar Association’s 2018 Silver Gavel Award and the Queens World Film Festival’s 2019 World Social Justice Jury Prize.

The event is complimentary and open to the public. Oklahoma attorneys who attend are eligible to receive two hours of general continuing legal education credit. For more information, email Professor Thai at thai@ou.edu, and to RSVP, email lawevents@ou.edu.