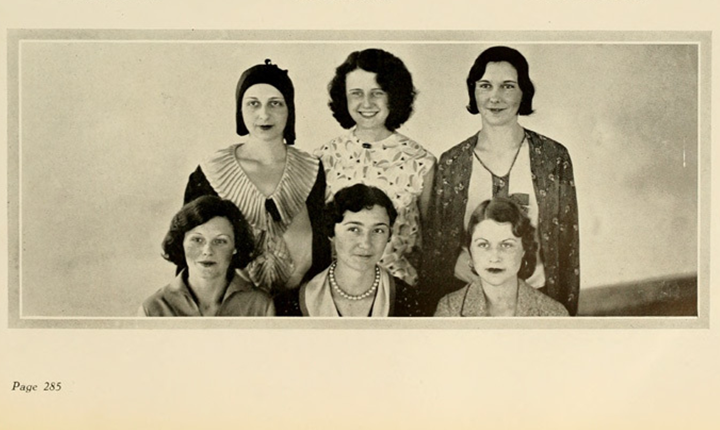 On August 18, 1920, the United States Congress ratified the 19th amendment granting American women the right to vote. To honor this day, we collected images of some of the first women admitted to the College of Law.

The law program was only two years old when Jessie Stiles was admitted in 1914. She is regarded as the first female graduate because she was the first to complete the entire program, graduating in 1916.

Stiles practiced law with her husband until he died in 1928, then moved to Albuquerque with her son where she taught music into her 90's.  She was an enrolled member of the Cherokee Tribe.

The above photo is of the 1930 Kappa Beta Pi women’s law sorority.

Bernice Berry ('31) was the first woman elected judge in Oklahoma. She's the one on the top right, by the way.  The names do not track with the picture. (Top right)

Ruby Kolodny ('30) is the child of Russian Jewish immigrants who settled in Prague, Oklahoma. In 1931, she ran unsuccessfully for mayor of Wetumpka.  After the death of her father in 1933 she moved to San Francisco and practiced law with her husband Eli Freed for decades at the law firm of Freed and Freed.  (Top left)

Elizabeth Cox ('31), along with Bernice Berry, were Order of the Coif.  They were the only women in their class of 68 people. (Bottom center)