Five Named to OU Law Board of Visitors 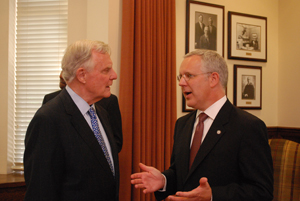 Burrage, a 1993 OU law graduate, serves in the Oklahoma Senate, representing Oklahoma’s Rogers and Mayes Counties in District 2. Burrage has served as a Delegate to the American Council of Young Political Leaders and also was designated as Member of the 2008 Class of Aspen-Rodel Fellowships in Public Leadership. In 2011, he was named Assistant Minority Floor Leader.

Everest, a 2003 OU law graduate, practices law at GableGotwals. She previously served as an Assistant Attorney General representing the State of Oklahoma as general counsel to state agencies and commissions and as a litigator in tort, procedural and employment law cases. In 2010, she served as general counsel for Oklahoma Attorney General Drew Edmondson’s gubernatorial campaign.

Henry, a 1988 OU law graduate, practices law at Lester, Loving and Davies. He was the 26th Governor of the State of Oklahoma. He was first elected governor in 2002 and won re-election in 2006. Henry is only the third governor in Oklahoma history to hold two consecutive terms.

Taylor, a 1981 OU law graduate, practices law at McAfee and Taft. She was Tulsa’s 38th mayor from 2006 to 2009, the second female to hold this position in the city’s history. In 2003, Taylor was appointed Oklahoma Secretary for Commerce and Tourism by Gov. Henry and was tasked with heading three executive state agencies and acting as the governor’s small business advocate for the state. She returned to work with Gov. Henry in 2009 as Chief of Education Strategy and Innovation.