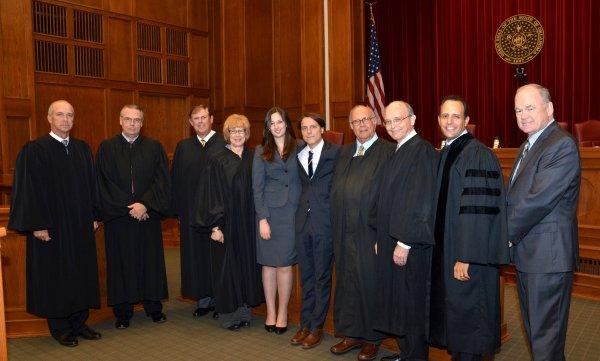 In a close contest, Kelsey Frobisher and Blake Johnson were declared the winning team in Friday’s final of the 2013 Calvert Moot Court Competition at OU Law.

Frobisher and Johnson argued the position of the respondents in Town of Greece, New York v. Susan Galloway and Linda Stephens, a real case that is on the U.S. Supreme Court docket this term, but has not yet been heard by the justices. Runners-up Joe Trail and Mahtab Doty argued on behalf of the city.

The question presented was “whether the (Second District) Court of Appeals erred in holding that a legislative prayer violates the Establishment Clause notwithstanding the absence of discrimination in the selection of prayer-givers or forbidden exploitation of the prayer opportunity?”

The finalists, all second-year law students, had about a month to prepare for the competition. They read the actual briefs filed by the attorneys who will be arguing the case before the Supreme Court. The students thoroughly researched both sides of the case because they have to be ready to argue both sides during different rounds of the competition.

“All of these students did a tremendous job,” OU Law Dean Joseph Harroz said. “I and the other members of the judging panel complimented both sides on how well prepared they were and their professionalism.”

Friday was the fifth time the finalists had argued one side of the case or the other, having advanced through two preliminary rounds, an “elite eight” round and the “final four.” Other semifinalists included Patrick Ahern, Brian Koss, Brooke Churchman and Justin Hedges.