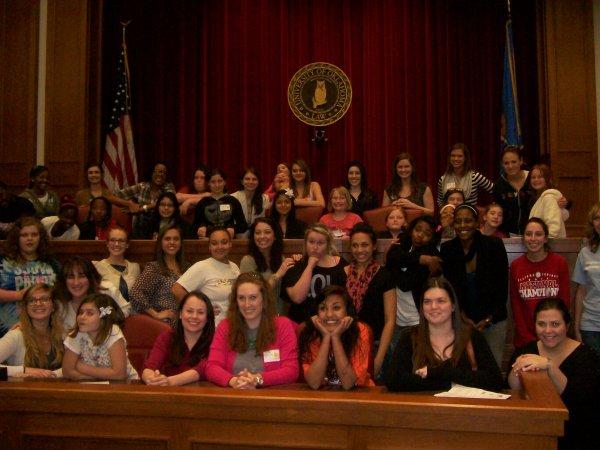 The vans arrive near the south entrance of the law school. The doors open and a group of young girls pours out, 26 to be exact. Who are these young girls, and why are they at the law school?

For the second year in a row, the Organization for the Advancement of Women in Law (OAWL) teamed up with the Center for Children and Families, Inc. (CCFI) to host a Friday night “Girl Power” event at OU College of Law. As part of CCFI’s “Neighborhood Centers” initiative, the Girl Power program is a special group designed to help girls navigate the challenges of middle school. Many of these girls lack strong, female role models in their lives. Now, once a year, the girls come to the law school to engage in fun games and learning activities.

The evening began with 2L Megan Thompson leading the group in some challenging icebreakers. The weather was lovely so we were able to play outside. The first game required the teams to strategize and cooperate in order to get their group across the “molten lava” the quickest. The second game allowed the girls to bond and be creative as they came up with their team cheer.

Next, the girls took a tour of the law school. The first stop for my group tour was the law library. The girls were fascinated by all of the books. They couldn’t get over it! They asked, “Have you read all these?” To which I replied, “Almost.” I quizzed the girls on the identity of the busts throughout the library, and everyone got Lincoln correct. They enjoyed spinning the movable bookshelves, and staring at pensive students from the second level of the library. Then, I took them across the atrium into the Phillip’s Courtroom. This was their favorite part of the tour. One girl asked, “Can we just stay in here the whole time?” I told her, “Just wait until you see the Bell Courtroom!” I asked them questions such as where the judge sits, what does the judge do, where does the jury sit, what do they do, etc. and we acted out the roles. One girl even drew a diagram of the courtroom and the actors so she could remember later on.

After the tour, it was time for dinner. We had a catered dinner of pasta, bread, and salad, and it was delicious. The girls were thankful to receive such a meal.

The last and most important activity of the event took place in the Bell Courtroom. We led them through a law activity called, “No Vehicles in the Park.” While the concept of playing a game that hinges on statutory interpretation sounds boring to us law-folk, the girls loved it. We initially sat down to discuss the statute, what it meant, what its purpose was, and how it defined a vehicle. We then proceeded to some fact patterns. Is a bike a vehicle? Should we allow an ambulance with a dying person inside to drive through the park? The answers the girls gave were astounding. They articulated public policy exceptions. They thought about the letter of the law versus the spirit of the law. They were thinking like lawyers without even knowing it.

And then the games began. Some girls put on robes and became judges. Others raised their hands high in the air to be picked as counsel. They learned how to address the court, with the counsel members saying, “May it please the court,” and the judges saying “Yes you may.” With the help of OAWL members, the girls gave their arguments. The panel of judges deliberated, and delivered their verdict. After five or six rounds, every girl had participated, and it was time for the evening to conclude.

This event has become so important to the members of OAWL. I grew up with encouraging parents – parents that told me I could be anything I wanted to be. The sky was the limit. Many of these girls don’t have that kind of encouragement in their lives. They don’t know what’s possible for them to achieve, or even hope for.

Girl Power is the event where girls learn that they can be anything they want to be, including lawyers. It’s a way to encourage girls in our community to dream big.