In Her Own Words: Grace Dawkins' Internship with the Norman City Attorney 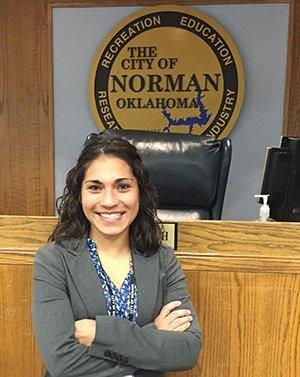 In May of 2014 I started working for the Norman City Attorney's Office as a legal intern. Starting March 23, 2015, I worked as a licensed legal intern (LLI). I became licensed after taking the MPRE, a legal ethics exam; registering with the Oklahoma Bar Association as a student member; and taking an exam over the laws specific to Oklahoma licensed legal interns. LLIs are allowed to appear in court and practice as licensed interns in a variety of cases, however there are some areas where even an LLI must be accompanied by an attorney.

I chose the internship with the City Attorney's office for several reasons: I knew I would be exposed to a wide variety of legal practice; the office location was about 3 miles from campus making it ideal for a law student; and the people I met in the office genuinely liked each other and working with each other. It was evident that my interviewing board enjoyed their jobs. After I started, I fell in love with the work too.

Almost every municipality has a City Attorney (City Counselor as some cities refer to them). Not many really understand what those attorneys and their offices do. City Attorneys are the legal counsel for the municipality as an entity. They defend the City against claims in state and federal court. They prosecute traffic offenses and misdemeanors in municipal court. They represent the City as a plaintiff in condemnation cases, as a creditor in bankruptcy cases, and as an employer in workers' compensation cases.

In addition, the City Attorney advises the City Council, City Manager, and Mayor on a daily basis regarding various, often critical issues. They advise all boards, committees, and commissions, and they draft and review all contracts that the City enters into. The reality is, City Attorneys do a little bit of everything.

My experience has been incredibly rewarding and abounding with opportunities. As an intern, I wrote ordinances that were made law, presented to City Council, researched and wrote advisement memorandums on current law and changing law, wrote various contracts for the City, won trials in municipal court, attended hearings in district court, wrote requests for proposals on major city projects that required a bidding process under state law, and helped with the business industrial district project that many Norman residents refer to as "the big new shopping area with the Super Target" on the east side of Norman. In addition, I have met many local attorneys and judges.

I loved my internship because of the variety of work projects and the work-life balance. It was not a high-stress work environment and the attorneys I worked with genuinely cared about doing a good job with every task. I think my experience at the City Attorney's Office has played a major role in my future employer's decision to offer me a job.