In Her Own Words: Kathryn Caudill's Internship Abroad 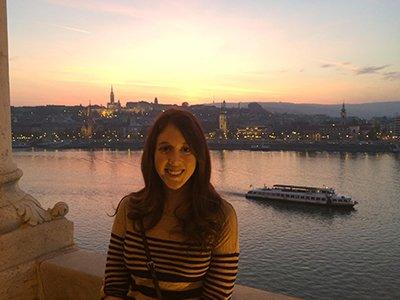 For the fall semester of 2015, I was able to spend four months interning for the United States Embassies in Bratislava, Slovakia and Budapest, Hungary. I spent most of my time working in the political section, but was also able to learn more about the other functions of the embassies, including the economic, public affairs, and consular sections. The political section is primarily responsible for communicating and advocating for U.S. policy goals with officials from the host countries.

I was able to select the cities where I interned. I was specifically interested in Central Europe due to the large Romani population in the region. As a dual-degree student in the OU Public Health program, I wanted to further focus on international initiatives to address health disparities in the large Romani minority. I was able to learn more about local nonprofits and how they partner with the U.S. Embassy for grants and projects to further population health.

I was also able to attend a conference regarding the political involvement of Romani people across Hungary. The conference was hosted by Hungarian/American investor George Soros. After the conference, I was able to meet and visit with Mr. Soros.

It was an interesting time to live and work in the region as many countries were grappling with the influx of refugees coming from the Middle East. Slovakia and Hungary both had strong initial reactions to the incoming migrants, with Hungary closing its borders and both countries condemning the migrants and the EU’s possible plan to distribute the migrants across multiple countries.

Working within the Embassy, I was able to see diplomacy in action as political officers promoted ideals of multiculturalism and equality while balancing European concerns for sovereignty and security after the Paris attacks.

The Embassies also place a large focus on helping to encourage anti-corruption efforts and rule of law in these countries still emerging from histories of occupation by the Nazis and Communist Russia. Ideals taken for granted in the U.S. such as democracy, freedom of speech, and transparency are still just burgeoning concepts in the region.

I loved the experience of living in Central Europe. In Slovakia, my balcony overlooked the Bratislava Castle and I walked down cobblestone streets to work everyday. In Budapest, I was able to see the symphony, cruise the Danube, and hike through the Buda hills. I was able to spend my weekends traveling around Europe including trips to Denmark, Ukraine, and Iceland. I met people who are passionate about U.S. values and making them accessible to people around the world.

OU Law gave me the opportunity to experience a new legal culture and spend a semester learning more about the world, the U.S., and myself.