Hilary Moffett: Survivor of the Fittest 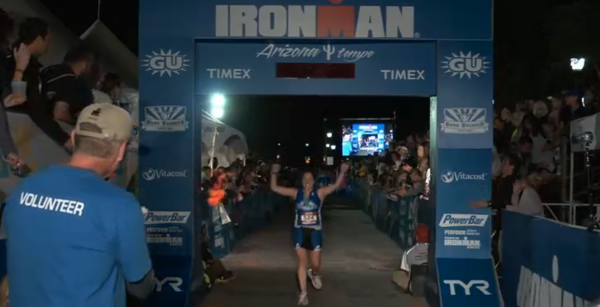 To say that 1L Hilary Moffett has overcome a few challenges in her life is an understatement. The cancer survivor has also conquered several marathons and one grueling Ironman triathlon.

The physical challenges began when Moffett was 13 years old. She had heart surgery to fix a valve issue that she was probably born with. “They fixed it,” she said. “No problem. Not a big deal.”

About six months later, the left side of her body developed a tremor. Her doctors in Tulsa thought the shaking may have been a side effect of the surgery, which had required them to basically induce a heart attack while Moffett was still awake. They soon learned, however, the surgery was not the cause of the shaking. It was actually being caused by something – doctors couldn’t tell Moffett what that something was – in her brain. The doctors told her that the mass in her head was not growing, and that there didn’t appear to be any blood flowing to it.

“So we sit on it for two years because they can’t biopsy it, and they don’t know what it is, so there wasn’t a treatment for it,” she said.

Finally, after visiting a hospital in St. Louis for another opinion on the mass, Moffett decided to have her second major surgery before the age of 18 to have the mass removed. Doctors performed the surgery on Nov. 20, 2002, during the fall semester of Moffett’s junior year of high school. About a month later, doctors told her that the mass was a cancerous tumor.

Moffett graduated high school and studied for two years at the University of Southern California before transferring to Washington University in St. Louis. After graduation, she went to work in Washington D.C. as legislative director for Oklahoma congressman Dan Boren. All the while, she continued to go back for yearly tests to make sure the cancer wasn’t back. A decade has passed, and no tumors have returned.

The 10-year anniversary of the surgery to remove the tumor was Nov. 20, during the fall semester of Moffett’s 1L year at OU Law. Moffett, who has run several marathons, including the Boston Marathon, which she qualified for with a time of 3 hours and 33 minutes, decided she was going to do something bigger to celebrate her 10-year anniversary.

“I wanted to do something really outrageous and ridiculous,” she said, “so I did the Ironman on Nov. 18.”

By Ironman, Moffett meant the Ironman Triathlon in Tempe, Arizona – a 2.4 mile swim, a 112 mile bicycle ride, and a marathon back to back to back. That’s 140.6 miles total. The monumental race took her 13 hours and 10 minutes to complete, which was well below her goal of 15 hours. She said the marathon was the hardest part, but that she kept going as a tribute to the 140 people who have fought or are fighting cancer. Each mile of the race was dedicated to one person’s fight.

“There were so many times throughout the race, where I was like ‘What are you doing? This is so dumb. I hurt, and I’m miserable, and I just want to stop,’” Moffett said. “Then I looked down at this list of people who aren’t as lucky. They don’t get to do things like this anymore. It’s very humbling.”

Many first-year law students are overwhelmed simply by the challenges of law school. But Moffett has faced those challenges while also training for a triathlon, often for four or more hours a day. She said the perspective she gained from overcoming cancer and the challenges of two major surgeries before she was an adult was extremely beneficial.

“It’s just a balancing act, and, you know, I would get up early and go for an hour run and then go to class and study and then maybe take a break and … It’s funny how you find time for what’s important,” she said. “And that was very important to me, and it was worth it.”

As for what’s next, Moffett said she is not sure yet, although she is organizing a training group for law students interested in running the Oklahoma City Memorial Marathon in April. Students who are interested in joining the group may contact Moffett at hmmoffett-1@ou.edu.