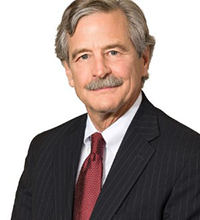 NORMAN, OKLA. – Oklahoma City attorney John Reeves will be honored with the Eugene Kuntz Award from the University of Oklahoma College of Law on Oct. 28 at the Oklahoma Oil and Gas Reception.

Reeves will be recognized for his distinguished career in the energy industry and his many contributions to oil and gas law, including various cited articles and his concentrated practice of conservation matters before the Oklahoma Corporation Commission.

“OU Law is honored to present this esteemed award to someone who mirrors the legacy that Dean Eugene Kuntz established: exemplary ethical standards and academic excellence,” said OU Law Dean Katheleen Guzman. “John Reeves is a highly accomplished courtroom lawyer who is well respected by his peers.”

The award is named for former OU Law dean and noted oil and gas professor Eugene Kuntz. The award is presented annually in conjunction with the Eugene Kuntz Conference on Natural Resources Law and Policy, one of the largest conferences in the nation specifically focusing on oil and gas law. The conference, which will be held Friday, Oct. 29, at the Oklahoma City Convention Center, is hosted by OU Law and the Energy and Natural Resources Law Section of the Oklahoma Bar Association.

Reeves practices law at the Oklahoma City law firm Conner and Winters and has appeared on the list of Super Lawyers since 2006. He is consulted frequently regarding pending legislation and contributes to the Oklahoma Corporation Commission rulemaking to provide an efficient and fair system for all parties.

The Oklahoma Oil and Gas Reception is sponsored by Richard Books, Clark Musser, Mahaffey and Gore P.C. and Trimble Law Group. For more information on the reception or the Kuntz Conference, visit our website at law.ou.edu/Kuntz-Conference.

About the University of Oklahoma College of Law