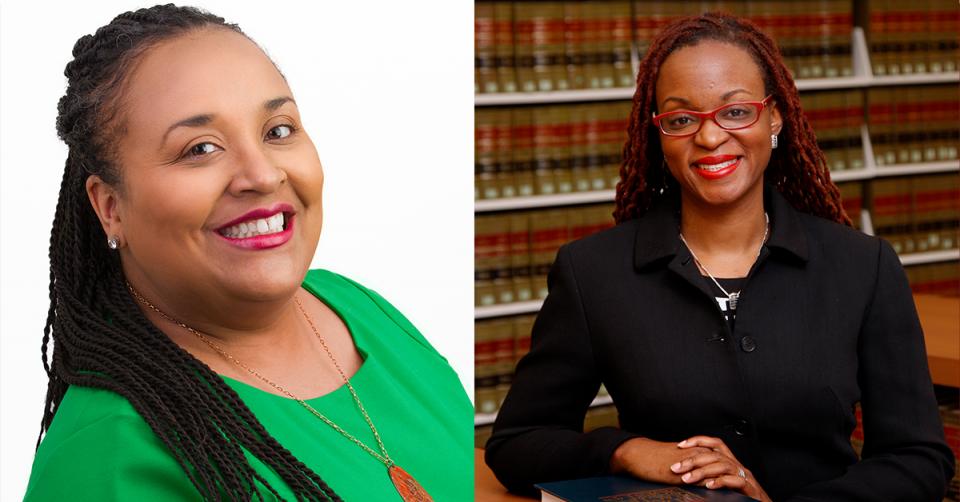 NORMAN, OKLA. – Two legal scholars and authors will discuss historic and present-day permutations of a form of racial profiling in a Zoom webinar hosted by the University of Oklahoma College of Law, set for noon Wednesday, Oct. 21.

Taja-Nia Henderson, dean of the Graduate School at Rutgers University, Newark, and Jamila Jefferson-Jones, professor at the University of Missouri, Kansas City, will present a talk focusing on their article, “#LivingWhileBlack: Blackness As Nuisance,” which examines the “viral” hashtag “#LivingWhileBlack” that started trending in 2018 in response to an incident in a Philadelphia Starbucks where a store manager called police to report two Black customers who entered the store and sat at a table while waiting for a friend.

In the article, Henderson and Jefferson-Jones argue that these more recent incidents are now technology-enhanced incarnations of older pernicious attempts to exclude Black people from public and shared space.

“We look forward to welcoming Dean Henderson and Professor Jefferson-Jones to the College of Law and learning more about how technology has furthered racial divides,” said OU Law Interim Dean Katheleen Guzman. “This is a powerful opportunity for students to gain insight into how policymaking, property law and criminal law impacts the Black community, both historically and in recent incidents.”

Henderson, who is also a professor of law at Rutgers Law School, researches and writes on slavery, punishment and the law. Her research has been supported by fellowships and grants from the John W. Kluge Center at the Library of Congress, the New York Public Library, the American Philosophical Society, and others. Her book manuscript-in-progress, Bound: Race and Slavery in an Early American Prison, examines the use of jails and prisons as instruments of racial control in the slaveholding American South.

Henderson is a graduate of Dartmouth College, and earned her juris doctorate and master’s and doctoral degrees from New York University. At NYU School of Law, she was a Dean’s Scholar, Senior Notes Editor of the NYU Law Review and recipient of the Gary E. Moncrieffe Graduation Award. She has also been recognized with the Professor of the Year award by the Student Bar Association at Rutgers Law School.

Jefferson-Jones writes about property and wealth attainment by communities and groups on the margins of society. She uses critical race methodologies to interrogate the ways in which racial majorities seek to exclude racial minorities – particularly Black people – from public and privates spaces, through the use or threat of police action to enforce the racial segregation of space and the broader cultural effects that such segregation could hold. Her recent article, #LivingWhileBlack: Blackness As Nuisance (co-authored with Henderson) was published in the American University Law Review and featured in The New York Times.

Jefferson-Jones is a professor of law at the University of Missouri Kansas City School of Law, where she teaches courses in Property, Fair and Affordable Housing, Entrepreneurial Urban Development, Real Estate Transactions and Professional Responsibility. In addition to her appointment to the School of Law, Jefferson-Jones recently served as the interim director of the Black Studies Program in the College of Arts and Sciences. She is a graduate of Harvard Law School and Harvard College. Before entering academia, she practiced law for over a decade at firms in the District of Columbia and in her hometown of New Orleans.

To RSVP to attend the Zoom webinar, visit the RSVP link. For additional information or accommodations, please contact lawevents@ou.edu or (405) 325-7479.