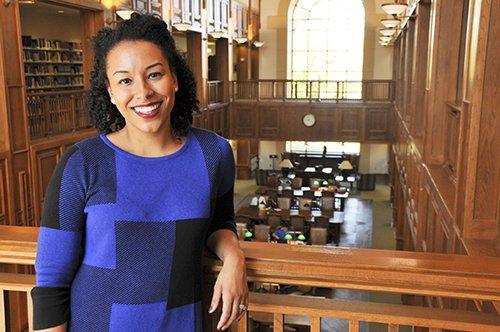 It can take decades for professionals to secure a job of their dreams. Nicole Lynn, a graduate of OU Law’s Class of 2015, had a different experience.

“I came to law school with the sole purpose of becoming a sports agent,” said Nicole. “I have always wanted to help athletes make the transition from college football to the NFL and then transition out of the NFL. Many athletes make a ton of money over the course of their career, but end up bankrupt. I want to be a sounding board for them and help them retain wealth.”

Nicole took a first step into her chosen industry because of an opportunity she had to work at the National Football League Players Association (NFLPA) in Washington D.C. At first, she did not know if she would be able to work for the NFLPA as funding was a challenge. With the help of OU Law administration, Nicole was able to accept the internship offer.

“When I found out I got the job in D.C., I had less than two weeks notice until I had to be there,” she said. “Within three days I had a scholarship that helped fund my travel and living expenses.”

As a Partner Services Intern for the NFLPA, Nicole worked with 30 different NFL sponsors acting as a mediator between the sponsors and players during negotiations for use of the players’ likenesses in advertising.

Working for the NFLPA cemented Nicole’s decision to be a NFL sports agent. Despite the long process of acquiring certification and insurance, Nicole excelled and was hired by PlayersRep Sports Management as its first female sports agent.

Nicole credits OU Law for the role the college played in helping her pursue the career of her dreams.

“OU Law supported my every move,” she said. “They believed in me.”

Anyone who knows Nicole knows that she is not done achieving. She has already set her sights on a new goal.

“There are currently no African-American female agents who have a NFL player on a team roster. I hope to be the first.”