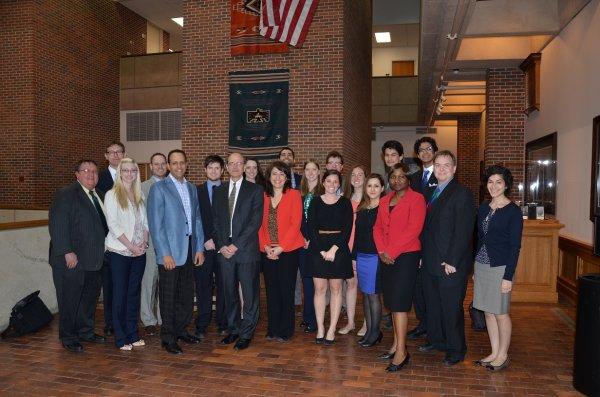 March 28, 2014 was a memorable day for the University of Oklahoma College of Law – particularly for the school’s Oklahoma International Law Society (OILS), which hosted a breakfast reception for U.N. Assistant Secretary-General for Legal Affairs, Stephen Mathias.

Mathias, one of the highest-level officials to speak at the College of Law this year, opened the breakfast with remarks relating to hot international law topics before engaging in a Q-and-A style discussion with OILS members.

“It was refreshing to see someone with so many credentials appear so approachable and humble,” OILS president Jennifer Lawmaster reflected after the event. “He was very conversational and seemed to genuinely enjoy the discussion with the students.”

For Aswad, OILS’ faculty adviser, it was a pleasure visiting with an old friend. “We used to teach an international peacekeeping course together at Georgetown's law school and it was really fun to be with him in an academic setting again”, Aswad commented about Mathias’ visit.

Many OILS members who attended the breakfast are novices in international law, with limited exposure to the UN in general.  Second-year OU Law student and OILS member Alex Shipley remarked, “I can honestly say I had no knowledge about the UN’s Office of Legal Affairs prior to hearing him speak.  I thought his explanation of the different sections of the Office was very interesting.”

For OILS members and the OU Law student body, Mathias’ visit made a lasting impression and set a high bar for future events.  “I would like to see more speakers like Stephen Mathias at OILS events next year,” First-year OU Law student and OILS Member Alex Campbell suggested.  “The breakfast’s informal setting allowed the students to interact with him on a more personal level.”

Taking note of such feedback, Lawmaster intends to plan next year’s OILS agenda with Mathias’ precedent in mind.