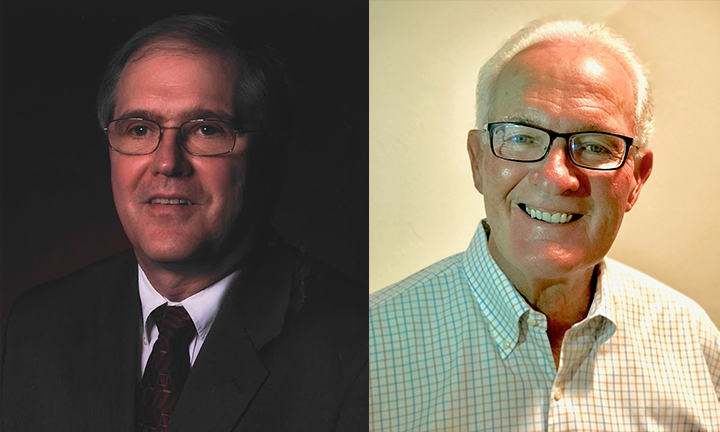 NORMAN — The University of Oklahoma College of Law will honor two of its alumni, Richard K. Books and Richard A. Grimes, with the Eugene Kuntz Award at the Oklahoma Oil and Gas Reception on Nov. 1. The award recognizes their many contributions to the energy industry and to oil and gas law in particular.

“We are honored to recognize both Richard Books and Richard Grimes as the recipients of this year’s Kuntz Award,” said OU Law Dean Joseph Harroz Jr. “Both are graduates of the OU Law class of 1977, and ever since then, they have worked diligently to advance oil and gas law in Oklahoma. Their accomplishments and contributions to the legal field render them incredibly deserving of an honor worthy of one of their former law professors and mentors – the great Eugene Kuntz.”

The Eugene Kuntz Award is named for former OU Law dean and renowned oil and gas professor Eugene Kuntz. The award is presented annually in conjunction with the Eugene Kuntz Conference on Natural Resources Law and Policy, the largest conference in the nation focusing on oil and gas law. The conference, which will be held Friday, Nov. 2, is hosted by OU Law and the Oklahoma Bar Association’s Energy and Natural Resources Law Section.

Books earned his B.A. in political science from Phillips University and his juris doctorate from OU Law. After law school, he practiced law for 15 years with the firm of Watson and McKenzie. Books has been with the Oklahoma City firm of Elias, Books, Brown and Nelson since its inception in 1997. Over the course of his career, he has helped to define oil and gas law in Oklahoma through participation in over 50 published and unpublished appellate decisions. Most of his practice has been before the Oklahoma Corporation Commission, where he has represented many oil and gas operators actively developing natural resources in Oklahoma.

While pursuing his bachelor’s degree at Oklahoma State University, Grimes was drafted into the U.S. Army in 1970. Upon his release from active duty, he went on to earn his B.S. in business from OSU and his juris doctorate from OU Law. After law school, he became an associate and then partner at Monnet, Hayes and Bullis. In 1982, Grimes formed a small oil and gas firm with John Gelders, which remained together for 25 years and would later include Wayne Anderson and Jerry Day as partners, forming what is today known as Grimes, Anderson and Day. Grimes ceased litigation in August, but his law practice consisted exclusively of representation of independent operators at the Oklahoma Corporation Commission and district court litigation involving oil and gas related matters. He is a past president of the Oklahoma City Minerals Lawyers Association.

The Oklahoma Oil and Gas Reception is sponsored by Devon Energy Corp., Echo Energy, Mahaffey and Gore P.C., and Spencer Fane LLP. For more information on the reception or the Kuntz Conference, email cle@law.ou.edu or call (405) 325-7479.