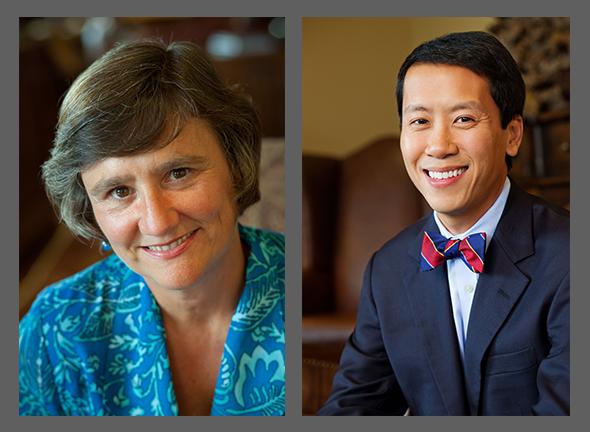 NORMAN — Two University of Oklahoma College of Law professors, Mary Sue Backus and Joseph Thai, have been appointed to the Oklahoma Advisory Committee to the U.S. Commission on Civil Rights. The commission is an independent, bipartisan agency charged with advising the president and Congress on civil rights matters and issuing an annual federal civil rights enforcement report.

The commission maintains 51 state advisory committees, one for each state and the District of Columbia. Each is composed of citizen volunteers familiar with local and state civil rights issues. Committee members conduct reviews and produce reports and recommendations concerning local civil rights issues, including justice, voting, discrimination, housing, education, and other important themes. Appointees serve four-year terms and are unremunerated.

“It is a great source of pride that two of the 14 members of the Oklahoma Advisory Committee to the U.S. Civil Rights Commission are members of the OU Law faculty,” said OU College of Law Dean Joseph Harroz Jr. “Their appointments are a testament to their commitment to promoting social justice and equality. I know Professors Backus and Thai will produce meaningful work toward the advancement of a more civil society.”

Backus is the Robert Glenn Rapp Foundation Presidential Professor at the OU College of Law, where she teaches criminal law, education law, evidence and civil procedure. Her recent scholarship focuses on reforming Oklahoma law in the areas of juvenile competency and virtual charter schools. She joined the OU Law faculty in 2004 after serving as a visiting assistant professor of law at William and Mary School of Law. She began her legal career as a law clerk to Judge H. Emory Widener on the 4th U.S. Circuit Court of Appeals.

From 2004 to 2007, Backus served as a co-reporter for the National Committee on the Right to Counsel, a bipartisan group reviewing the indigent defense system throughout the nation and creating consensus recommendations for reform. She has served on the board of directors for Oklahoma Close Up, a nonpartisan, nonprofit citizenship education program for high school students, and the Women’s Resource Center, a nonprofit providing services to victims of domestic and sexual violence.

At OU Law, Backus volunteers as a moot court coach; is faculty sponsor of two student groups, the Organization for the Advancement of Women in Law and Phi Alpha Delta, a law fraternity dedicated to community service; and serves as director of the China Summer Law Program. She is also a member of the Provost’s Advisory Committee on Women’s Issues. Backus earned her bachelor’s degree from the College of William and Mary; master of arts in teaching from the University of Alaska, Anchorage; and her J.D. from William and Mary School of Law.

Thai is the OU College of Law’s Presidential Professor of Law and Glenn R. Watson Centennial Chair in Law. He joined OU Law in 2003 and teaches constitutional law, Supreme Court theory and practice, First Amendment, and criminal procedure. He also has co-taught a “mind-bending” course on morality, law and science on OU’s main campus.

Thai has served as law clerk to Justice John Paul Stevens and Justice Byron White of the U.S. Supreme Court, as well as Judge David Ebel of the 10th U.S. Circuit Court of Appeals.

Prior to joining the law faculty, Thai practiced in the Office of the Attorney General in Massachusetts and GableGotwals in Oklahoma. He currently engages in pro bono litigation in the areas of civil rights, criminal law, and constitutional law. In 2014, before the Supreme Court decided the issue nationally, his clients successfully challenged Oklahoma’s same-sex marriage ban as violative of the constitutional guarantees of liberty and equality.

Thai writes about the Constitution and the Supreme Court, and frequently comments in local and national media. He earned his bachelor’s degree from Harvard College and his J.D. from Harvard Law School.

Founded in 1909, the OU College of Law is Oklahoma’s premier law school. OU Law offers small sections and class sizes that encourage a strong sense of community; accomplished faculty with international expertise; and a state-of-the-art facility equipped with the latest technology. The OU College of Law is the academic home of more than 500 students enrolled in the juris doctor program, the John B. Turner Master of Laws Program, the master of legal studies program and various dual degree programs. For more information about OU Law, visit law.ou.edu.