May 14, 2019 | By Melissa Caperton, Director of Communications 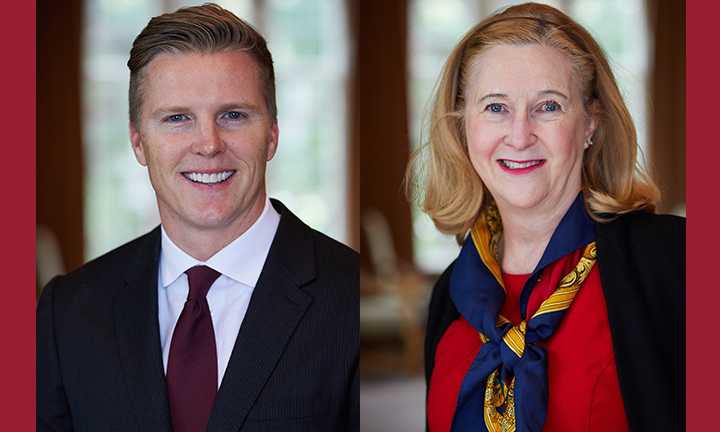 Presented by the OU Board of Regents and the OU Alumni Association, the Regents’ Alumni Award honors the important roles of OU alumni and supporters to the life of the university.

Trent Luckinbill earned a Bachelor of Arts in finance from the Michael F. Price College of Business at OU in 1997, and a Juris Doctor from the OU College of Law in 2000. He is a member of the Delta Tau Delta fraternity and a life member of the OU Alumni Association. He began his legal career as a lawyer at the Department of Justice, where he served as counsel to the assistant attorney general for the criminal division and later counsel to the assistant attorney general for the antitrust division, analyzing large corporate mergers and acquisitions for approval in energy, financial, telecommunications, information technology, and domestic and international intellectual property rights.

During his time at the Department of Justice, Luckinbill also was a member of the Committee on Foreign Investment, which reviewed applications of foreign investment in the United States. Luckinbill was appointed by the attorney general to serve as the deputy executive director of the DOJ’s Task Force on Intellectual Property and represented the DOJ’s intellectual property interests internationally.

In 2013, Luckinbill and his twin brother, Thad Luckinbill, who also received a Regents’ Alumni Award, formed Black Label Media as an independent studio with the goal to finance and produce prestigious commercial content in film and television. Black Label’s film “La La Land” was released in 2017 and garnered a record 14 Academy Award and seven Golden Globe nominations. Black Label also recently produced the film “12 Strong” with fellow producer Jerry Bruckheimer, as well as other titles including “’71,” “Only the Brave,” “Sierra Burgess” and “Begin Again,” among others. Black Label has produced, or is in development on, over 25 film and television projects, including a large television production with Apple and feature films with Netflix, Fox and Sony, set for this year.

Luckinbill lives in Los Angeles and was born and raised in Enid, Oklahoma.

Cynda Ottaway earned a Bachelor of Arts in English in 1975 from OU and a Juris Doctor from the OU College of Law in 1978. As a law student, Ottaway was a member of the Order of the Coif and the Oklahoma Law Review. She earned the Corpus Juris Secundum and American Jurisprudence awards. During her undergraduate studies, she was a member of Phi Beta Kappa, President’s Honor Roll, President’s Scholar, Mortar Board and Who’s Who in American Colleges & Universities.

Ottaway is chair of the Private Wealth and Closely-Held Business Practice Group at the Oklahoma City law firm of Crowe and Dunlevy. She has served as a member of the OU Law Board of Visitors since 2015 and has been an engaged and respected board member who has helped the college reach some of its greatest accomplishments, particularly with fundraising.

Ottaway has been an exceptional alumna through her professional and community involvement. Her extensive engagement in improving the practice of law is evidenced by her participation as past president of the American College of Trust and Estate Counsel, the leading trust and estate organization of peer-elected trust and estate lawyers. She has been a member for over 25 years and has served in several other leadership roles with ACTEC, including service on the executive committee, board of regents and the ACTEC Foundation.

She is renowned for her legal expertise, demonstrated by the innumerable leadership positions she has held in both the Oklahoma Bar Association and American Bar Association, where she served as vice chair of the Real Property, Probate and Trust Section for five years.