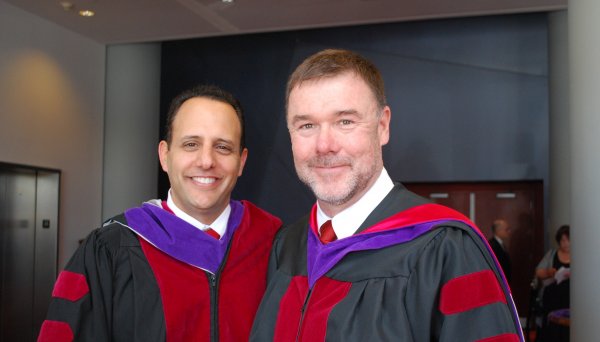 Less than four months after inspiring OU Law graduates as keynote speaker at the May Convocation, Jerry Stritzke ('85) is taking on a new professional challenge. Recreational Equipment Inc. (REI) has named Stritzke as the company's new president and CEO. He replaces Sally Jewell, who left the company in April when she was confirmed as U.S. Secretary of the Interior.

Stritzke has been serving as president and COO for luxury accessory brand Coach Inc. since 2008. He helped guide the company through the recession years while increasing sales from $2.6 to $5.1 billion.

REI, which is based in Seattle and had nearly $2 billion in sales last year, is one of Washington state's three largest private companies. REI’s core offerings include products for camping, hiking, climbing, bicycling, fitness, and paddle and winter sports, and adventure travel trips and classes.  The company operates 130 retail stores in 32 states, and ecommerce sites, www.rei.com and www.REI-Outlet.com.

Following graduation from OU Law, Stritzke practiced law with Best, Sharp, Sheridan and Stritzke, earning partnership status at only 28 years old. He opened Stritzke Law Office in 1992 and soon thereafter began working with the retail consulting firm Webb and Shirley. In 1999, Stritzke was hired by Limited Brands and in less than a year, he was asked to serve as Chief Executive Officer of MAST Industries, one of the world’s largest contract manufacturers, importers and distributors of apparel. From 1999 through August 2007, Stritzke held several executive positions with Limited Brands Inc., ultimately serving as the Chief Operating Officer and co-leader of Victoria’s Secret, including Victoria’s Secret Stores, Victoria’s Secret Direct, Victoria’s Secret Beauty and Pink.

In his May speech, Stritzke shared his experiences, including how his time at OU Law helped shape his career. He expressed how valuable the OU Law degree will be to the graduates, regardless of their specific career path. “The analytical skills and ability to understand context I learned while at OU Law governed me throughout my professional life and directly contributed to my successes,” Stritzke said. He concluded with an important challenge to the class: “Go out and change the world.”

OU Law is proud of alumnus Jerry Stritzke and wishes him the best in his new endeavor.