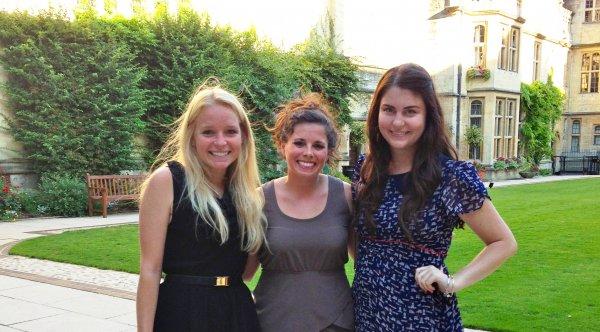 The Oxford Summer Program is a once in a lifetime chance to live, travel, and learn abroad. You won’t have another chance in your life to study abroad with your friends, classmates, and professors. The program allowed us to experience an Oxford education while still having the freedom to travel on long weekends.

During the program, we were able to get to know the professors and their spouses outside of the classroom. For example, we had a whiskey tasting with Professor Anderson where he shared his knowledge of whiskey and Scottish culture.  Also, the program provided themed nights such as Harry Potter Night and James Bond Night. These theme nights were a chance for us to relax and get to know each other better. The staff was very accommodating and helpful with trips around Oxford and outside of Oxford.

There is something for everyone in Oxford. The parks were beautiful, providing an ideal place to run, walk, nap, read, and picnic.  One of the most memorable experiences in Oxford was walking along the Thames River through a historic commons pasture called Port Meadow. We brought peppermints and fresh English carrots to feed the horses and ponies that live in the pasture, and once they knew we had treats they were as frisky and friendly as could be! (We even have pictures of one of the more aggressive ones chasing Professor Gensler, who was holding the bag of carrots!) There is a great selection of restaurants, pubs, bars, and food trucks to go to at all hours of the night. If you are looking for a late night snack, we recommend Ahmed (across the street) and the pizza truck across from G&D’s ice cream shop. Oxford is home to many historic pubs, like the Kings Arms and the Turf, that have a relaxing atmosphere and provide cool beverages and snacks.

Since we did not have class on Fridays, we took full advantage of every weekend to travel around Europe. Among the places visited were London, Spain, the Netherlands, France, Ireland, Scotland, the Czech Republic, and Germany. Even dealing with a limited student budget, we were able to travel almost every weekend by flying on budget airlines or taking the train.

Oxford is a great way to reward yourself for surviving your first year of law school. Studying abroad was an unforgettable experience and it was worth every penny.