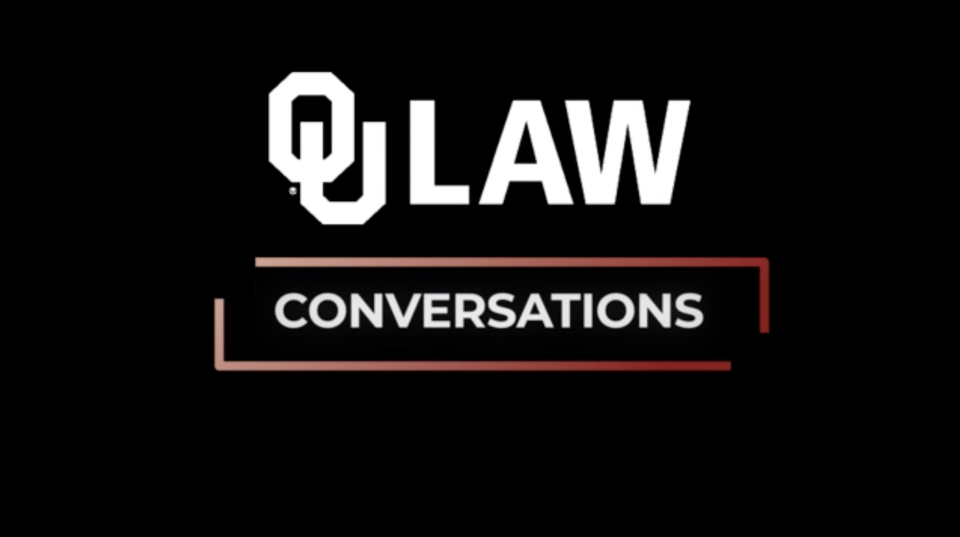 Tell us about starting your career at OU Law.

My undergraduate class was in 1952 and I did a combined degree. My senior year in undergraduate school at OU was my first year in law school. I had a two-year military interruption when I was a second lieutenant in the U.S. Marine Corps commissioned through the university NROTC program. I served from 1952-54 in the Marine Corp and went to Korea. I came back for my last two years of law school and finished in 1956.

Tell us about the highlights of your extensive career.

For 11 years, I was general counsel of Phillips Petroleum Company. There I dealt with all aspects of the law. The company had a lot of litigation. During my tenure there, we had the unfortunate experience of having the worst industrial accident in the history of the petrochemical industry. A huge plant that we owned and operated in Houston exploded. There were 1,100 lawsuits filed in the aftermath of this accident. Twenty-three people were killed and the property damage was enormous. That happened in 1989, four years into my tenure at Phillips. For the next seven years, it occupied a great deal of my time.

In private practice, I was primarily a litigator. My biggest case in terms of publicity was Silkwood vs. Kerr McGee. I was lead trial counsel for Kerr McGee and the case was of national import in the nuclear industry. It was a long, hard trial. We lost it in trial court, but we won on appeal on all but one small issue. The case settled on that small issue.

Tell us about your involvement in the bar association.

What were your biggest accomplishments as President of the American Bar Association?

I had three major initiatives. The first initiative was to improve racial and ethnic diversity in the legal profession. I served as chair of a committee on the future of the profession before I became president. In that capacity, I learned about certain data--the data was that the poorest representation of minorities of any profession in the country was the legal profession. We had only about a 4% representation of African Americans, Asian Americans, Native Americans and Latin Americans. At that time, those minorities consisted of 30% of the general population. My feeling was that this was a dangerous situation. As the proportionate part of those populations increased and their representation in the legal profession remained low, then we ran a high risk of those communities losing respect for the law. If they walk into a courtroom and there’s nobody there that shares their ethnicity, or speaks their language, and there’s no one there with whom they can identify, then their natural reaction is why should I respect this since this is not my law or my rule of law. The leadership of the bar really picked up on it and engaged in programs to improve the participation in our legal profession, including my commencement of the Legal Opportunity Scholars Fund, which continues today and provides scholarships to first year law students of racial and ethnic minorities across the nation.

My second initiative was to extend the rule of law internationally. We already had a mature program in Eastern Europe that had been very successful and I wanted to expand that to Latin America and to Africa. I made some headway there, but created new commissions to work in those jurisdictions and recruited members of the U.S. Supreme Court to participate as Justice O’Connor had done in the Central and Eastern European areas.

My third initiative was to harness the tools of technology to improve on the delivery of legal services to moderate and low income citizens of our country. Legal services are expensive and they need to be. It takes a lot of work, effort, energy and investment to prepare a lawyer to deliver legal services and obviously the costs of services have to reflect all that. Those with lower or even moderate income can’t afford those services. At the time, we were at the threshold of the digital world and the internet, but I wanted to get some initiatives to better utilize those tools to deliver legal services to a broader spectrum of people. I had committees and sections in the ABA that worked on the project and made some headway. Twenty years later, there has been a lot of headway made and there are various programs and procedures that facilitate the extension of knowledge about the law and bring legal services to people who couldn’t afford it otherwise.

What would you say is your legacy?

If I have any legacy, I would say the Legal Opportunity Scholarship Fund. I, along with initial donations by myself, my wife and Crowe & Dunlevy, helped create while I was at the ABA and that continues today.  Over 400 scholarship recipients across the nation were able to complete their legal education because of its existence.  Within the first year, we were able to raise over $1 million in support of underrepresented students in law schools nationwide.  I wanted the recipients to stay in touch with their communities so there would be a link to the justice system and the rule of law and many of them have gone to work in public interest areas.

What’s your advice to our current students and recent graduates?

My advice would be to work hard at casting a very wide net on the possibilities open to you. In other words, if you want to work in private practice and you want to work in a private law firm, then identify as many firms as you can that are acceptable to you and make application. Really work at it because you won’t connect on all of them, certainly you won’t connect on most of them, but if you cast the net out, then you’ve increased your odds of making a connection. So just work hard at it.

My senior partner who was one of my major role models was VP Crowe of Crowe & Dunlevy. He said there are three things that make a successful lawyer. First, you have to have the ability to attract clients. People have to have confidence in you and respect you. They have to look to you for ability and confidence. If you can’t get hired, then you can’t be a success. Second, when you do get hired and undertake employment, then do a good job. Be a good lawyer. Perform well so that you establish a reputation of being a hardworking, good lawyer who gets results when results are achievable. Finally, you have to have the ability to get paid for what you do. So in order to keep a law firm going, you have to follow this rule. I was managing partner for Crowe & Dunlevy for about six years and dealt with a lot of these issues and economics is certainly right up there.