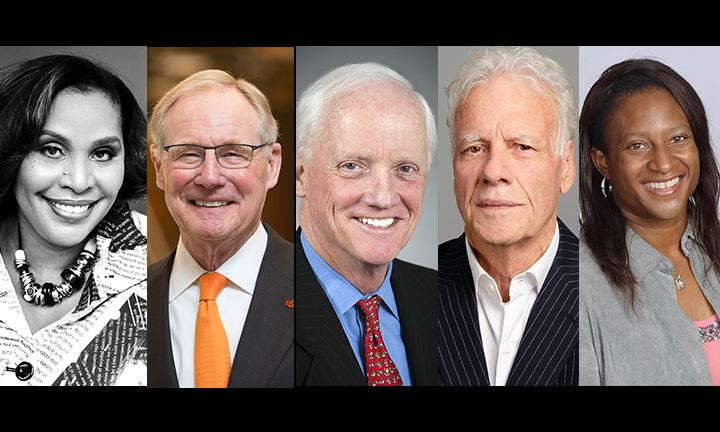 This year’s Order of the Owl honorees are:

Since its establishment in 2011, the Order of the Owl has inducted and honored 28 deserving OU Law alumni.

“It is an honor to recognize these outstanding alumni, each of whom has demonstrated remarkable leadership and meaningful service to others,” said OU Interim President Joseph Harroz Jr. “Their achievements are an inspiration, and they are all incredibly deserving of this high honor.”

Joi Gordon joined Dress for Success® as a board member in 1999 and became CEO of Dress for Success Worldwide in 2002. Under her leadership, Dress for Success has become a globally recognized leader that has empowered more than 1 million women to become economically advanced in nearly 150 cities across 25 countries. In addition to expanding the organization’s reach, Gordon has broadened its programming, offering a full continuum of services that help women secure employment, advance in their careers and achieve financial freedom.

Gordon also serves as an executive board member and vice president of the Greater Queens chapter of the Links Inc., a member of the Women’s Forum of New York and serves as an adviser to the G100 Women’s Leadership Council. Previously, she served on several inaugural women’s advisory councils for American Airlines, Office Depot and VOICE, an imprint of Hyperion Books. She also served on the corporate board of directors of Urban Brands, parent company of fashion brand Ashley Stewart.

Gordon has received recognition from several professional and academic institutions, including the University of Oklahoma, which presented her with its second-highest honor, the Regents’ Alumni Award; the Legacy Award from Working Mother Media; Business Law in Leadership Awards from Lawyer’s Alliance; the Black Women’s Agenda Inc.’s Economic Business Award; the Distinguished Alumni Award from OU’s Gaylord College of Journalism; the Vice Chancellor’s Award from the American Foundation for the University of the West Indies; and the Ellis Island Medal of Honor.

Additionally, she has been profiled in Crain’s New York Business, Financial Times, Epoch Times and Black Enterprise. She also was named among Working Mother Magazine’s “Most Powerful Moms in Non-Profit” list and named one of the “25 Most Influential Black Women in Business” by Network Journal Magazine.

Gordon earned her Bachelor of Arts degree in radio/television broadcasting from OU and her juris doctorate from OU College of Law. She lives with her husband, Errol, in Queens, New York. Her greatest joys are her daughter and son, Sydney and Nicholas.

As the 18th president of Oklahoma State University and the OSU System, V. Burns Hargis oversees one of the nation’s most comprehensive land-grant university systems with more than 35,000 students, 7,000 employees and campuses located in Stillwater, Tulsa, Oklahoma City and Okmulgee. He is the second OSU graduate to lead the university as president.

Since taking office in March 2008, Hargis has enthusiastically united the broad OSU community of students, employees, alumni and donors behind his bold vision of a modern land-grant university that cuts across disciplines to better prepare students for success. Hargis has guided OSU to record enrollment and fundraising, with the college raising more than $2 billion in private support and adding more than 81,000 new donors, while overseeing a construction boom that is transforming the OSU campus to be more competitive in academics and athletics. Hargis and his wife, First Cowgirl Ann, are active across campus, interacting regularly with OSU’s diverse student body. Together, they have led OSU’s initiative as America’s Healthiest Campus.

Before being named OSU president, Hargis had a long and distinguished legal and business career, practicing law in Oklahoma City for 28 years, including time with the firm of McAfee & Taft, and serving as vice chairman of the Bank of Oklahoma. Many Oklahomans may also remember his political perspective and wit as a contributor on the award-winning TV program “Flashpoint.” In 1990, Hargis was a candidate for the Republican nomination for governor of Oklahoma.

Hargis received the state’s highest honor in 2009 when he was inducted into the Oklahoma Hall of Fame. He earned his accounting degree from OSU and his juris doctorate from OU. He and Ann have two children and three grandchildren.

Frank Keating’s career in law enforcement and public service spans 30 years, during which time he served in the FBI, both in the Reagan and George H.W. Bush administrations, held the positions of U.S. Attorney and state prosecutor, Oklahoma House and Senate member, and governor of Oklahoma from 1995 to 2003. In March 2017, he was appointed to a seven-year term on the OU Board of Regents.

In his first gubernatorial election, Keating won a three‐way race by a landslide and was later re‐elected for a second term in 1998, becoming only the second governor in Oklahoma history to serve two consecutive terms. As acting governor at the time of the bombing of the Alfred P. Murrah Federal Building in Oklahoma City in 1995, Keating helped raise more than $6 million dollars to fund scholarships for the nearly 200 children left with only one or no parents. His accomplishments as governor include winning a successful public vote on right‐to-work, tort reform, tax cuts, and major road building and education reform.

Keating is the chairman emeritus of the board of the Washington, D.C.-based Bipartisan Policy Center and served on the center’s Debt Reduction Task Force, a group of former cabinet members, elected officials and key stakeholders of both parties that recommended a series of tough measures to address the nation’s fiscal challenges.

He has served as a member of numerous boards, including those of the National Archives and the Jamestown Foundation, and has served as chair of the Advisory Board of Mount Vernon, the Federal City Council and the National Catholic Review Board.

Author of five award‐winning children’s books, Keating has also written biographies on Will Rogers, Theodore Roosevelt, George Washington, Abraham Lincoln and Ponca Indian Chief Standing Bear. He is the recipient of six honorary degrees and was inducted to the Oklahoma Hall of Fame in 2005.

Keating earned his undergraduate degree from Georgetown University and a law degree from OU. He and his wife, Cathy, live in Oklahoma City and have three children and 11 grandchildren.

During the latter years, Sharp acted as the managing partner of Sharp and Associates, a Washington-based firm, with a practice focused on white collar criminal defense and related matters. He also represents professional athletes confronting disciplinary matters.

In addition to the representations listed above, Sharp’s practice had an international flavor. He appeared before courts and on behalf of clients from such disparate places as La Paz, Bolivia, Buenos Aires, Geneva, and the High Court on the Strand in London.

Prior to private practice, Sharp served as a Navy JAG officer, where he not only prosecuted and defended both special and general courts martial but was also selected to represent the Commander Air Group 17 in the investigation of the disastrous fire aboard the super carrier USS Forrestal in the Gulf of Tonkin.

After the Navy, Sharp distinguished himself as an Assistant U.S. Attorney for the District of Columbia. As a federal prosecutor, he was consistently assigned the most challenging cases, including the successful prosecution of a former U.S. senator. He was awarded the Department of Justice Special Achievement Award for his service.

Sharp has been profiled in, among others, The New York Times, which described him as “one of the best lawyers in Washington” who has “kept out of the limelight.” In a similar vein, Time Magazine recognized him as, “one of the best unknown lawyers in Washington.” Sharp chooses to remain out of the public spotlight as much as possible, believing that his clients are best served through this approach.

He is a frequent speaker at litigation programs and training sessions and consults at other law firms relating to cross-examination, trial tactics and strategy. For 30 years, he has been a fellow in the American College of Trial Lawyers and is consistently recognized by his peers for his trial skills and in publications addressing attorney excellence.

A native of Oklahoma, Sharp was educated at the University of Arizona and earned his Juris Doctor from the OU College of Law. He lives in the Washington, D.C. area with his wife, Carol, of almost 50 years. Together, they have five sons and five grandchildren.

As the senior associate commissioner and senior women’s administrator of the Pacific West Conference, Jane Teixeira has worked to provide the highest quality collegiate experience for student-athletes. Since she joined the conference in 2011, Teixeira has managed internal operations, a $1.2 million budget and acted as sponsor for the Student-Athlete Advisory Committee. She has been involved in overseeing compliance, sports medicine and senior women administrators while collaborating with 12 university presidents and faculty representatives.

In her role as the PacWest chief legislative officer, Teixeira addresses questions and concerns regarding local, state and federal laws, along with impending NCAA legislation that may affect the operations of the conference, student-athletes and its members.

From 2009 to 2011, Teixeira served as director of compliance for the University of Southern California, managing and supervising all compliance operations and administrative functions of one-third of all sponsored sports. She also worked with the NFL, NBA and WNBA athlete representatives seeking professional opportunity contact with student-athletes.

After becoming a member of the Arizona State Bar Association, Teixeira was hired by Texas A&M International University, where she helped the athletics department transition from NAIA to NCAA Division II. She served as the senior associate athletics director and the head softball coach at the institution. Later, Teixeira worked in the NCAA National Office in Indianapolis  as the assistant director for membership services and student-athlete reinstatement. She also supervised the 2008 NCAA Final Four Yes Clinic in San Antonio.

Throughout her career, Teixeira has taken pride as a mentor, helping students discover their passion and work toward their goals. She has been instrumental in establishing programming for mental health awareness and advocacy, diversity and inclusion, community service and leadership development.

Teixeira earned her master’s degree in physical education from Texas State University in 2003 and her juris doctorate from the OU College of Law in 2005. Outside of her professional responsibilities, Teixeira maintains her own goals and improvements in personal activities, such as jiu-jitsu with her daughter, Paige.

About the Order of the Owl Hall of Fame