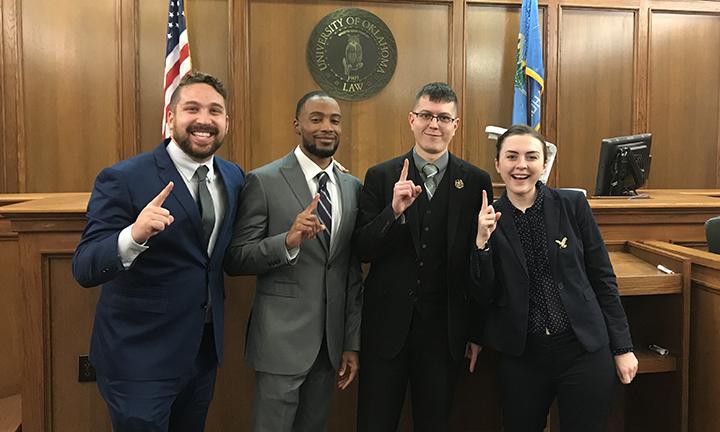 The OU College of Law recently hosted 10 law school teams from around the country for the regional round of the American Bar Association Law Student Division Arbitration Competition. More than 40 OU Law alumni and other experienced practitioners served as judges for the competition, which simulates a realistic arbitration hearing.

The OU Law team of Jourdan Johnson, Armando Melendez, Laura Waddill, and Fox Whitworth won the regional, qualifying them for the national competition in Chicago in January! The other OU Law team of Maddie Martin, Dakota Parish, Blake Toellner, and Alex Velarde made it to the final four round. Both teams are coached by Prof. Rebekah Taylor. The team from Drake University Law School placed second overall.

This year’s hypothetical problem involved allegations of personal injury and negligence in a nursing home.

The OU College of Law is nationally known as a top law school for competitions and moot court. OU Law finished its 2017-2018 competition season with three national championships, and the college placed fifth out of 156 law schools nationwide in the ABA’s inaugural Competitions Championship. For the last two years, OU Law has secured a spot in the top 5 law schools in the country for moot court by the Blakely Advocacy Institute.