OU Law Hosts ‘And Then They Came for Us’ Screening, Panel Discussion Featuring Dr. Korematsu

October 9, 2019 | By Gehrig Thurston, Department of Communications and Events 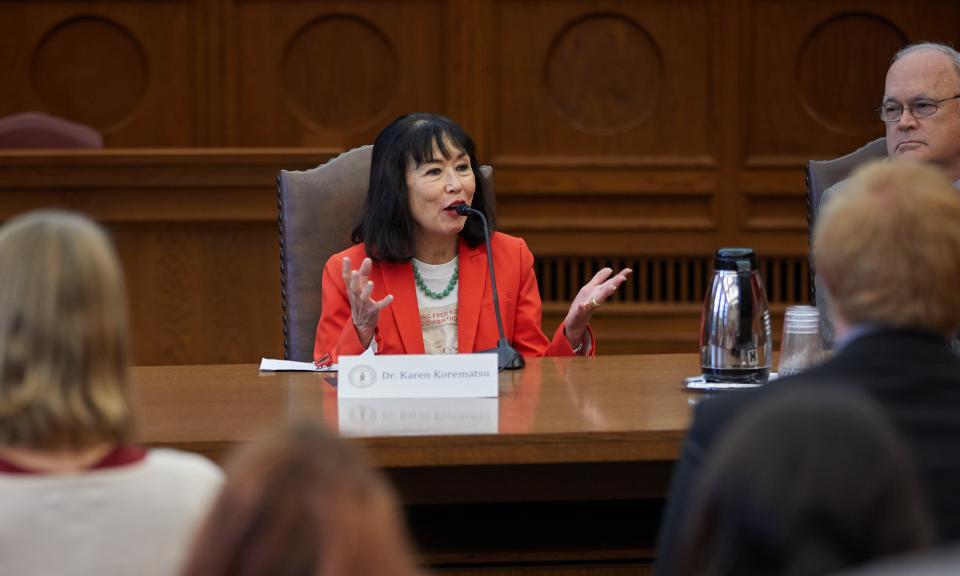 Dr. Karen Korematsu, daughter of Fred Korematsu and renowned civil rights activist, joined with the OU Law community Monday, Oct. 7 for a screening of the award-winning documentary And Then They Came for Us, which details the extreme racial injustice and human rights abuses committed by the United States in incarcerating over 110,000 Japanese Americans during World War II. The theme of the evening was to reflect on that history of invidious discrimination and to resist its repetition in our times.

Joining Dr. Korematsu on the panel were Don Tamaki, the attorney who helped overturn Fred Korematsu’s infamous conviction for defying the government’s internment orders; and OU Law professors Rick Tepker and Taiawagi Helton, with their colleague Professor Joseph Thai, a constitutional law scholar, moderating the discussion. Students, faculty, alumni, and guests from the greater community filled the Bell Courtroom to capacity to listen to the panelists’ stories and absorb the civil and personal impact of racially charged legislation and executive action. 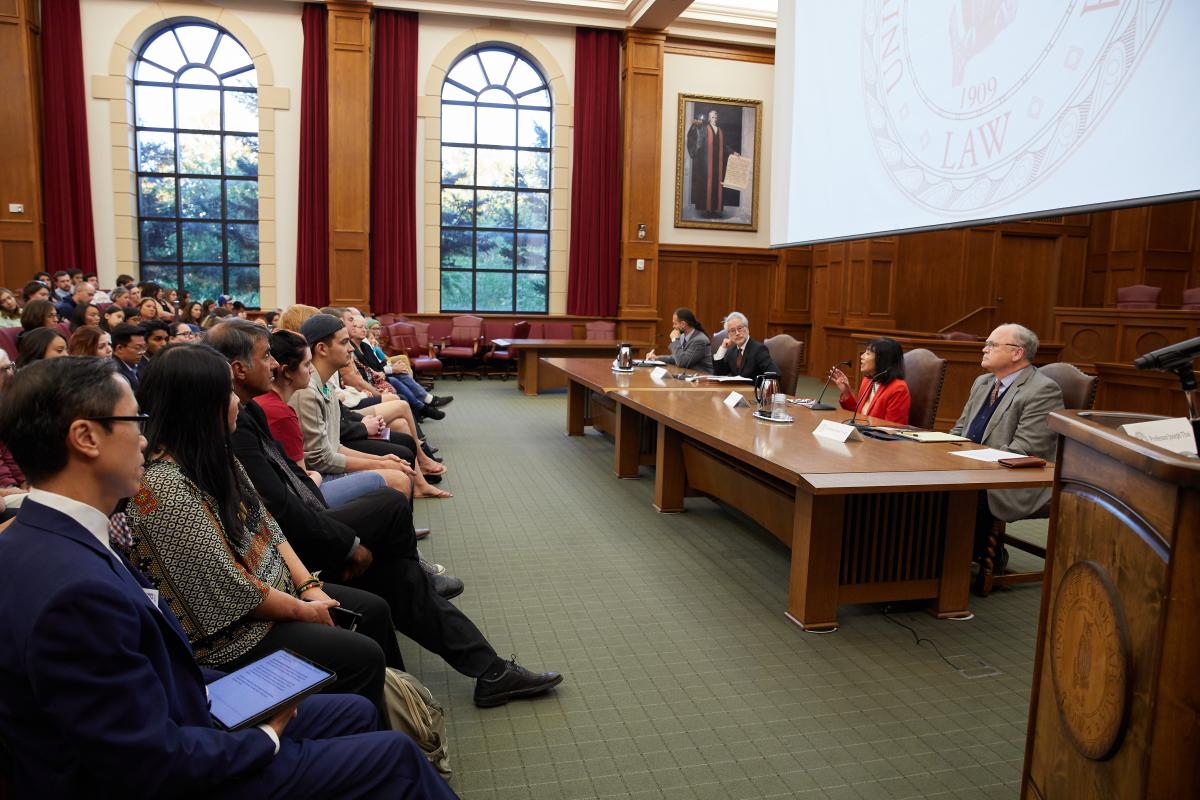 Interim President Joseph Harroz Jr. began the event by reaffirming that one of OU’s top priorities is fostering diversity and inclusion, and noting that we cannot pursue inclusion if we cannot discuss, and learn from, past and present acts of exclusion. As President Harroz noted, our history is marred by landmark cases legalizing grave racial injustices, from the Dred Scott decision denying personhood and citizenship to slaves and former slaves, to Plessy v. Ferguson sanctioning segregation, to the Korematsu case upholding the Presidential order for the mass incarceration of Japanese Americans. He stated that the Constitution’s principles do not defend themselves, so we must actively defend them.

And Then They Came for Us is a wrenching examination of Japanese American internment and the racism at its root. Interviewees include actor and activist George Takei and other children whose families were forcibly removed from the West Coast and relocated in prison camps in the interior of the country. These interviewees recount their experiences as their families were split apart, their finances were frozen, their possessions were abandoned, and their freedoms and rights as citizens were stripped by the United States solely on the basis of their Japanese ancestry. These accounts are accompanied by the photography of Dorothea Lange, who was commissioned by the U.S. government to document the humaneness of the removal and detention. Instead, her photos captured the indignity, injustice, and abuses of the entire enterprise, as well as the undeniable humanity of the incarcerated Japanese Americans, from infants to the elderly. The end result is a powerful testament to the danger of unchecked popular and government racism. 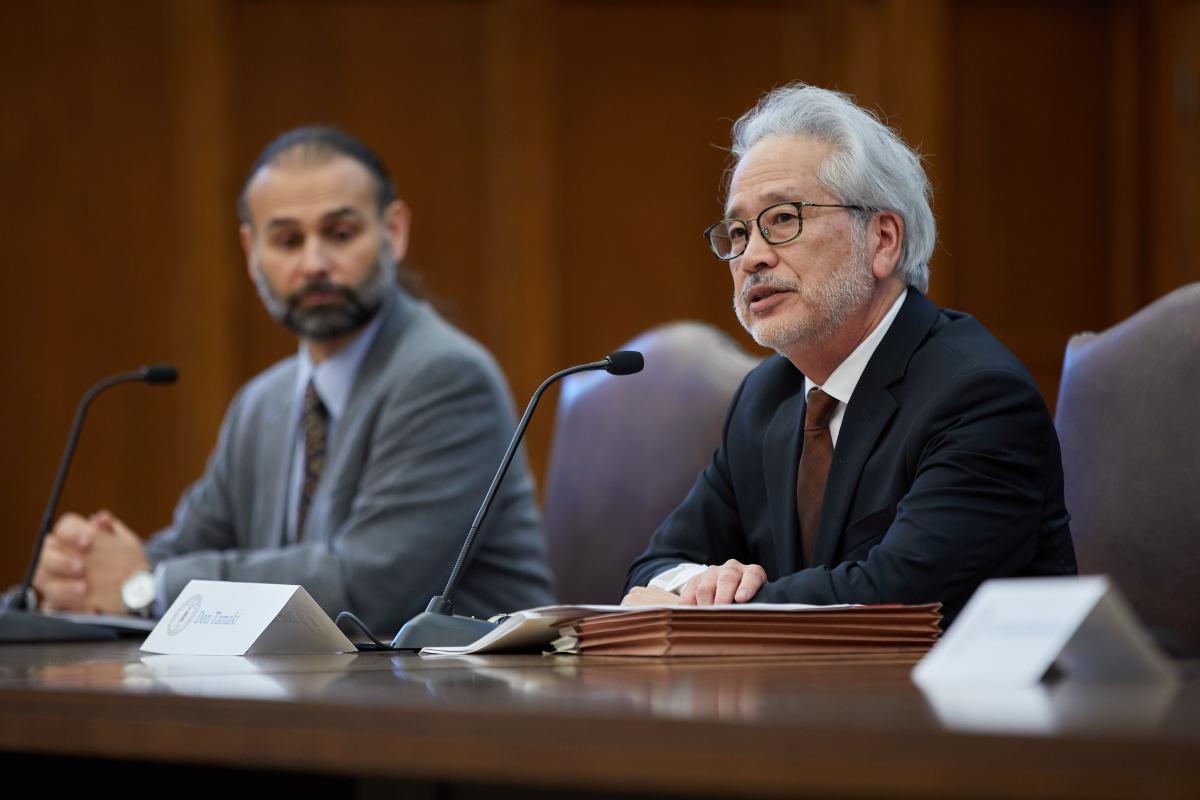 The film and panelists also drew explicit parallels between Japanese American internment and present-day exclusionary policies such as the current Administration’s travel ban targeting Muslim-majority countries. According to Mr. Tamaki, false invocations of national security in both instances gave cover to wholesale discrimination against a disfavored minority group. Likewise, Dr. Korematsu opined that the Supreme Court’s recent decision upholding the travel ban, Trump v. Hawaii, repeated the constitutional error of Korematsu and dishonored the legacy of her father.

Dr. Korematsu ended the evening by reminding the attendees that “prejudice is ignorance,” and that it can only be beaten with greater education and understanding.

And Then They Came for Us is the recipient of the World Social Justice Jury Prize from Queens World Film Festival and the 2018 Silver Gavel Award for Media and the Arts from the ABA.