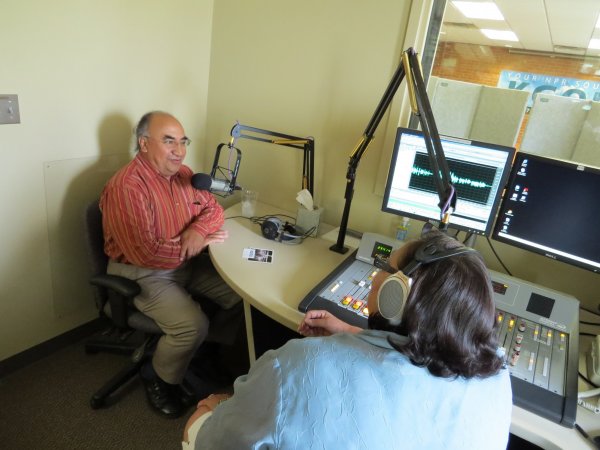 (Reposted with permission of the author and KGOU. Photo by Professor Lindsay Robertson)

Francisco Cali is a Caqchikel Mayan from Guatemala. He is the first and continues to be the only indigenous member of the United Nations (UN) Committee on the Elimination of Racial Discrimination (CERD). Cali came to the University of Oklahoma as a visiting fellow at the Center for the Study of American Indian Law and Policy.

“I am here invited by Professor Lindsay Robertson to be participating in a program that he was able to found at the University of Oklahoma, to be part of the experience of Indian law, comparative law,” said Cali. “I think that gives me a big opportunity to know more about legal reality of American Indian natives here in the U.S., understand many things that sometime we don't understand because realities are so different even though we are the same people.”

Cali feels the burden of being the only indigenous person on CERD.

“I am very proud, but I feel sometimes that I have a big responsibility also on my shoulders because I have to do very good work,” said Cali. “If I am the only Indian people in the treaty committees, I have to leave not only a good experience but a good, we can say, we in Spanish say, a good taste of the work of the Indian people.”

It wasn’t always easy to leave or even know about a “taste of the Indian people” in Guatemala.

“The education that we had is teaching us that our people were stupid, that they were dumb, that they were dirty. That we were the shame of the country but knowing from my grandparents and some other people who were our ancestors, I starting to question and its when I started to have some problems with teachers.”

He was not alone in his feelings and when he and his fellow Mayan students began to question more and more as they got older, it brought unwanted attention, from the military. At first, Cali was unaware.

His family sent him to Canada for what Cali thought would be only a month. It turned into years. But he found his life’s work and he returned to Guatemala, and became part of a presidential commission, almost by accident.

“When I went back to Guatemala in '95 we stared a human rights organization in our country to not only to denounce all the human rights violation but also to teach people to know what human rights they have,” said Cali.

Unable to get their reforms passed by the Congress, they took their grievance to the President. He said he would create a presidential commission on one condition, that Cali be a part of it.  He said yes and this led to his present position with the United Nations.

He has found his trip to Oklahoma to be eye opening.

Francisco Cali dreams, dreams of a day when Guatemala might be called Guatemaya. And that, he says, is what keeps him going to make a better world for his children and grandchildren.