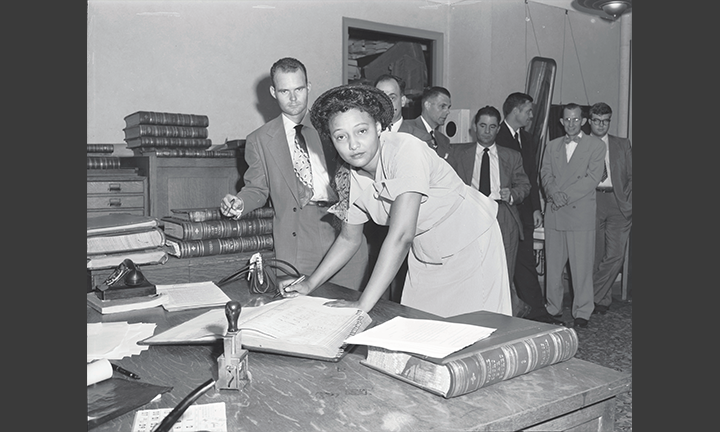 Events will be held at the College of Law and on the university’s main campus as part of a week-long celebration of Fisher and other civil rights leaders, which also acknowledges the ongoing pursuit of equality that remains today.

To honor Fisher’s legacy and her lasting impact on advancing equality, OU Law will host a discussion with Fisher’s children, Bruce Fisher and Charlene Factory, at noon Wednesday, Sept. 25 in the Dick Bell Courtroom at the College of Law. A performance of “I Know Where I’ve Been” by OU Law alumna and vocalist Chanda Graham will follow.

A celebration of Fisher also will be held at Monnet Hall, the location of the OU College of Law while Fisher was a student, at 3 p.m. Thursday, Sept. 26. A display depicting her law school admission journey will be unveiled at a dedication ceremony, and a reception will follow in the Conoco Leadership Courtyard at the Oklahoma Memorial Union. During the reception, members of OU Law’s Black Law Students Association will perform the play, “Ada Lois Sipuel Fisher Reflections.”

“Our law school – and our country – are forever indebted to Dr. Fisher’s steadfast persistence to secure equality for herself and those who followed,” said OU Law Interim Dean Katheleen Guzman. “Illuminating her story sheds light on the past injustices that have led us to where we are today; it is crucial that our students understand that her journey – which happened within the confines of our law school – is just one example of how the trajectory of the law is far from perfect. When our students graduate, they will be obligated to uphold the rule of law and ensure that the rights of all people are protected.”

Fisher’s admission to the OU College of Law 70 years ago was preceded by a three-year legal battle. At the time of her application to OU’s law school in January 1946, Oklahoma schools were segregated. Despite the merit of her academic credentials, Fisher’s application was rejected because of her race.

With the support of civic leaders from across the state, Fisher filed a lawsuit in Cleveland County District Court. This launched a three-year fight through the justice system, ultimately reaching the U.S. Supreme Court, which ruled unanimously in her favor. Fisher was finally admitted to the OU College of Law on June 18, 1949. Her landmark case laid the groundwork for the elimination of segregation in public education nationwide.

After graduating from the OU College of Law in 1951, Fisher practiced law in Chickasha and later joined the faculty at Langston University. She retired 30 years later as assistant vice president of academic affairs. In 1991, OU awarded her an honorary doctorate of humane letters, and the following year, she was appointed to the OU Board of Regents – the very group that once rejected her. Fisher died Oct. 18, 1995.

Admission to the Wednesday discussion at the College of Law, as well as the Thursday dedication at Monnet Hall and ensuing reception and play, is complimentary and open to the public. For more information about the Wednesday discussion, email lawevents@ou.edu. For more information about the Thursday events, email specialevents@ou.edu.