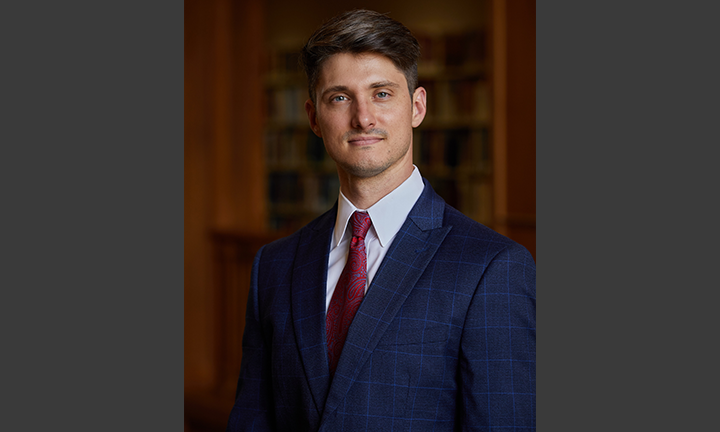 NORMAN — Chris Odinet, associate professor of law at the OU College of Law, has been appointed to a four-year term as one of Oklahoma’s eight delegates to the Uniform Law Commission. Odinet’s appointment to the ULC was made by Oklahoma Senate President Pro Tempore Greg Treat.

Established in 1892, the ULC is a national law group that seeks to provide nonpartisan, well-drafted legislation to bring clarity and stability to critical areas of statutory law across jurisdictions.

“Professor Odinet’s expertise in the areas of commercial law, property law and consumer finance, combined with his active involvement in related professional and academic organizations, make him an excellent addition to the commission,” said OU Law Interim Dean Katheleen Guzman. “We are delighted that he has been selected for this role, and more importantly, that he integrates service and scholarship and has an incredible passion for sharing the results with our students.”

Odinet becomes the third current OU Law faculty member to serve as a commissioner on the ULC, joining emeritus professors Owen Anderson and Frederick Miller. Miller also formerly served as the ULC’s executive director, chair of its executive committee and past president.

Odinet’s role as an Oklahoma commissioner continues his noteworthy involvement in law reform efforts. He previously served as one of Louisiana’s four delegates to the ULC. Within the ULC, he recently served on a committee that studied whether to make revisions to the Uniform Common Interest Ownership Act, a law that governs homeowner and condominium associations. He currently serves on the Joint Editorial Board for Uniform Real Property Acts, a ULC group that monitors state and federal laws relative to real estate. Additionally, Odinet was recently appointed to a committee of the European Law Institute charged with studying the law of digital asset transactions.

For his work in consumer rights and mortgage finance, Odinet has been appointed a fellow with the Cambridge University Centre for Property Law. As part of the American Association of Laws Schools, he serves as the chair of the Commercial and Consumer Law Section and is a member of the executive committees of both the Real Estate Transactions Section and the Financial Institutions and Consumer Financial Protection Section. He is co-editor of the Annual Survey of Consumer Finance Law, which appears in the American Bar Association’s The Business Lawyer publication.

In addition to his academic research being published in numerous leading law reviews, Odinet recently authored a book on the 2008 housing crash and its aftermath, Foreclosed: Mortgage Servicing and the Hidden Architecture of Homeownership in America. He also co-authored one of the leading casebooks on property law used in American legal education, American Property Law.

Odinet joined the OU Law faculty in 2018. Prior to teaching in academia, he was an associate in the business group of the law firm of Phelps Dunbar LLP.

More About the ULC

The ULC, also known as the National Conference of Commissioners on Uniform State Laws, provides states with non-partisan, well-conceived and well-drafted legislation that brings clarity and stability to critical areas of state statutory law.

ULC members are practicing lawyers, judges, legislators, legislative staff and law professors who have been appointed by state governments as well as the District of Columbia, Puerto Rico and the U.S. Virgin Islands to research, draft and promote enactment of uniform state laws in areas of state law where uniformity is desirable and practical.

For more information about the ULC, visit www.uniformlaws.org.

Founded in 1909, the OU College of Law is Oklahoma’s premier law school. OU Law offers small sections and class sizes that encourage a strong sense of community; accomplished faculty with international expertise; and a state-of-the-art facility equipped with the latest technology. The OU College of Law is the academic home of more than 800 students enrolled in the juris doctor program, the John B. Turner Master of Laws Program, the master of legal studies program and various dual degree programs. For more information about OU Law, visit law.ou.edu.