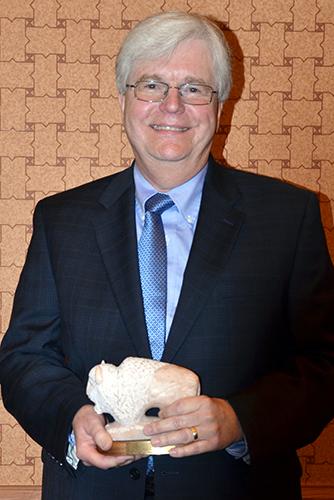 NORMAN — Professor of Law at The University of Oklahoma, Owen L. Anderson, received the Eugene Kuntz Award at the annual Eugene Kuntz Conference on Natural Resources Law and Policy last week. The award recognizes Anderson’s many contributions to the field of oil and gas law, as well as his role in establishing the Kuntz Conference. Anderson will assume emeritus status in December of this year.

The Eugene Kuntz Award is named for former OU Law dean and renown oil and gas professor, Eugene Kuntz. The honor is awarded annually at the Kuntz Conference, the largest conference focusing on oil and gas law in the nation. The Conference is hosted by OU Law and the Oklahoma Bar Association Energy and Natural Resources Law Section. This year, more than 550 oil and gas industry personnel and attorneys were in attendance.

In his acceptance speech, Anderson looked back on his time at OU Law and thanked a number of his colleagues for their support in helping develop OU Law’s oil, gas and natural resources program.

“I’m a very lucky man,” said Anderson. “I’ll quote the great philosopher Yogi Berra, who said, ‘If I had to do it over, I’d do it again.’”

At the award ceremony, OU Law Dean Joseph Harroz Jr. acknowledged Anderson’s contributions to the College’s energy program and to the Kuntz Conference.

“There is no one worthier of this year’s Kuntz Award,” said Harroz. “He has been a delight to our students and his colleagues, and we will miss him terribly when he retires this year.”

Speaking directly to Anderson, Harroz thanked him for his years of service, dedication to OU Law and its students and for his vision in establishing the Kuntz Conference in 1993.

“The idea of creating this conference in the name of your predecessor speaks volumes about your character and who you are,” said Harroz. “The current and former students that have been impacted by your work, passion, care and love – and that’s the right word, love – are all fortunate beneficiaries of your legacy.”

Anderson joined the OU Law faculty in 1992 where he serves as the Eugene Kuntz Chair in Oil, Gas and Nautral Resources and the Academic Director of the John B. Turner LL.M. Program in Energy, Natural Resources and Indigenous Peoples Law. Among his many achievements, in 2012 Anderson was named a George Lynn Cross Research Professor, the highest honor OU bestows on a professor for his or her scholarship. He is author or co-author of several books and more than 100 articles and holds membership in many energy associations and foundations. He serves as a trustee for the Energy and Mineral Law and Rocky Mountain Mineral Law Foundationsand is a frequent speaker on oil, gas and natural resources law. He is a lifetime Commissioner for the Uniform Law Commission and member of the American Law Institute.