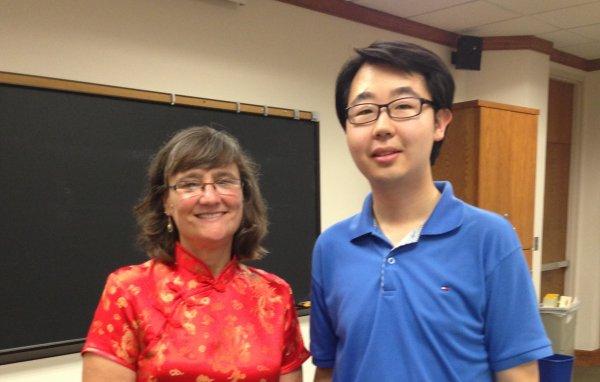 OU Law student Meng Shi, JD Candidate, Class of 2015, delivered an informative presentation Thursday on a golden age of China's classical civilization and imperial history. The forum on the Tang Dynasty was attended by faculty, staff, students and guests of the College of Law.

The discussion was titled, “The Enlightenment and Inspiration from the Tang Dynasty of China.” Meng, who is from Beijing and earned an LL.M. degree at Cornell University, says he used the summer break to prepare for the presentation. Meng pointed out how Tang China gained magnificent achievements in its economy, science and technology, international trade, architecture, literature, arts, and diverse religions. The discussion explored the international prominence, cosmopolitan culture, and open mind of the Tang Dynasty and how those factors have influenced our modern world.

“He did a great job describing the Tang dynasty with lots of vivid pictures and interesting commentary about what we might learn from the Tang successes,” said Professor Mary Sue Backus, who coordinates the Chinese Law Summer Program at OU Law and helped organize Thursday’s event.

Meng expressed his gratitude to Dean Joe Harroz, Associate Dean Michael Scaperlanda, and Professor Backus for the encouragement and support they provided as he prepared the presentation.