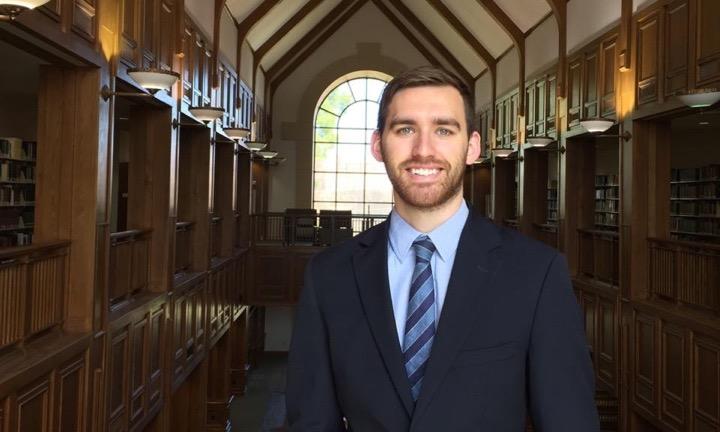 Norman, Okla.—A University of Oklahoma College of Law student, Aaron L. Fournier, is the recipient of a 2017 Udall Foundation Native American Congressional Internship assigned to the Bureau of Indian Affairs within the U.S. Department of the Interior. A member of the Chickasaw Nation and a native Oklahoman, Fournier works for his tribe at the South Central Climate Science Center on the University Research Campus. He is one of 12 American Indian and Alaska Native college, graduate and law students accepted into the program nationally.

“I am very excited for the opportunity to learn how the Bureau of Indian Affairs operates, and I am honored to have been selected into the Udall Foundation’s internship program. I am looking forward to an exciting summer living in Washington, D.C., while working with federal employees who share my passion for promoting tribal sovereignty,” said Fournier.

At the South Central Climate Science Center, Fournier assisted in authoring a handbook for university researchers interested in cultivating relationships with Oklahoma tribal members, while respecting native customs. He also conducts science camps that introduce Native American children to weather, climate and natural sciences by allowing them to participate in interactive experiments. In the future, he plans to work in Washington, D.C. where he can use his degree to advocate for increased tribal sovereignty.

In addition to Fournier, five other University of Oklahoma American Indian students have been recipients of the Udall Foundation Congressional Internship: Matthew Morgan in 1996; Clifford Jones in 1998; Tyler Corey in 2008; Pete Coser Jr. in 2010; and Kelbie Kennedy in 2013.

Udall Interns are selected primarily on the basis of their interest in learning about the federal government, their interest in tribal public policy or tribal governance, and their desire to support tribal communities. For more information about the Udall Foundation Native American Congressional Internship program, visit http://www.udall.gov/OurPrograms/Internship/Internship.aspx.