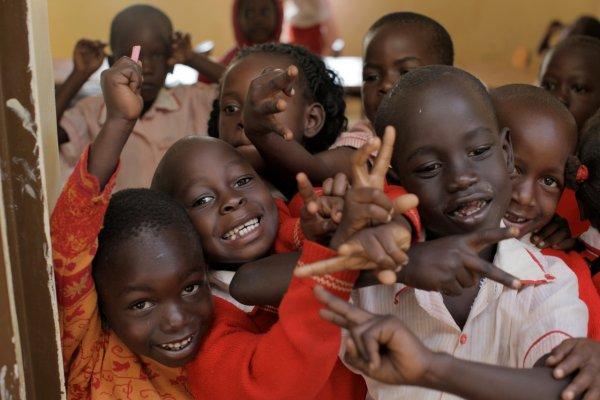 On March 8, OU Alumnus Reggie Whitten with Pros for Africa (PFA) and College of Law Dean Joseph Harroz announced the two organizations would collaborate to enhance the non-profit’s mission to assist African children and the college’s global educational offerings.

“Our organizations are working together to energize students to experience other cultures, develop a lifetime commitment to meaningful service, and prepare for the increasingly global practice of law,” Harroz said. “Pros for Africa has an amazing program in place, and we are thrilled to be a part of it.”

The trip was a dream-come-true for Whitten, who spearheaded the formation of the non-profit in January of 2010.

Whitten first visited Uganda in 2002, after his son passed away and a friend invited him to go as a healing experience. While coping with his own personal loss, he was inspired by the African children who were so joyful, even while living in war and poverty.

After meeting Sister Rosemary and learning about the difference her St. Monica’s School was making in children’s lives in Uganda, Whitten realized with special attention and ongoing assistance, Africa’s younger generation could change the future direction of their country.

Whitten came home with the desire to lead that change, and he began to enlist a team. Jay Mitchel, who was working as an attorney at Whitten Burrage Law Firm in Oklahoma City, agreed to help and garnered support from a few college friends who played football at OU. Soon, Roy Williams and Mark Clayton joined the group. Shortly thereafter, Bill Horn brought Adrian Peterson and Tommie Harris onboard and Jared Mitchel also joined the group, who established PFA in 2010.

Each of the founders plays a hands-on role in PFA and is eager to make the trips to Africa. The March 2011 trip was their second one.

“It’s not about just donating money all the time,” said Co-founder and NFL Player Roy Williams. “It’s about being there and having a presence. It’s an awesome site and experience, being able to serve the citizens of Uganda together.”

Each “pro” volunteer serves an important role in PFA. Professional athletes can attract much-needed media attention. Medical personnel staff clinics and provide important care. Attorneys bring a passion for and unique knowledge of human rights, which is crucial in a place where there are so many injustices.

“One of the wonderful aspects of being a lawyer is that we bring an insight and understanding that is valuable to almost every endeavor,” OU Law Professor Wattley said. “We know the questions to ask, the problems to anticipate, and where to go to get answers. By training, lawyers tend to be leaders, focusing on solutions. These programs are a reminder to our students that we are citizens of the world, not just Oklahoma.”

Whitten welcomes professionals of all types. He especially encourages others in the law community to get involved, noting that Africa’s legal system needs much improvement.

“There is strength in numbers, and the OU law community can help pave the way,” Whitten said. “It just takes one person to unite others and make a change. Just think of our country – someone had to write the first draft of the Constitution and Declaration of Independence.”

PFA may be going back to Africa as early as August 2011. Whitten admits his vision for the organization is bold and broad.

“Our future is unlimited,” Whitten said. “In 2010, we helped one country. In 2011, we went to two. In 2012, we’ll add a third, Sudan. Eventually I would like PFA to have a trip a month and a program in each of the countries in Africa. There’s almost an unlimited amount of things to do.”

For more details about PFA and how to get involved, visit www.prosforafrica.com.