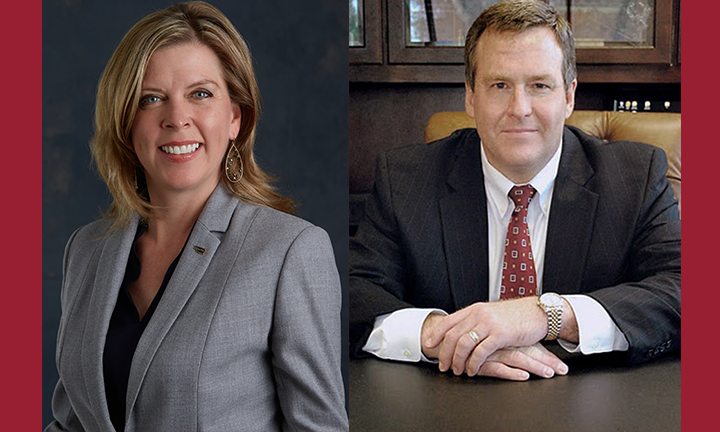 By honorary membership, limited to one per chapter per year, the order recognizes distinctive contributions by lawyers in their careers after law school.

When faced with a life-altering challenge, Dara Wanzer displayed a determination beyond expectation. During her third year at OU Law, Wanzer sustained a traumatic brain injury in a motor scooter accident. Her injuries were severe and would require months of specialized therapy to help her rebuild the functions of thinking, reasoning and speech in her brain that had been destroyed in the accident.

After completing an inpatient rehabilitation program, Wanzer continued with outpatient cognitive therapy. Her tremendous recovery was enhanced by the activities she independently pursued at home. Less than a year after the accident, Wanzer returned to law school. She graduated with distinction in 2006.

Today, Wanzer is a Senior Vice President and the Director of Human Resources with BancFirst, the largest state chartered bank in Oklahoma. Prior to her employment with BancFirst, Wanzer served, among other responsibilities, as a labor and employment and employee benefits attorney for INTEGRIS Health, the same health care system that provided her inpatient rehab years earlier. In her role at INTEGRIS Health, she provided legal support and guidance to the organization’s human resources professionals. Prior to joining INTEGRIS, she worked as an associate attorney specializing in labor and employment law at McAfee & Taft.

Wanzer is active in the community, currently serving as a board member for the Oklahoma Center for Nonprofits and the Southwest Benefits Association. She is a former board member for the Girl Scouts of Western Oklahoma, Sharing Tree and the Mary Abbott Children’s House. She has also served as a volunteer attorney for Oklahoma Lawyers for Children.

In honor of her exceptional bravery and strength of spirit, Wanzer was recognized with the Jim Thorpe Courage Award in 2013.

John Raley is a senior partner at the Houston law firm Raley & Bowick, which he founded in 2010. The firm specializes in complex business, intellectual property and professional liability litigation. He previously was a litigation partner at Fulbright & Jaworski LLP and was the managing partner of the Houston office of Cooper & Scully PC.

In Raley’s first appellate argument, he won a unanimous reversal before the Texas Supreme Court, sitting en banc, in the case that set the statute of limitations for all general torts in Texas. He has been first chair trial counsel in over 40 jury trials in complex matters, including seven where damages of over $50 million were sought.

In 2013, Raley was given a Presidential Citation by the Texas State Bar in recognition of his seven-year pro bono fight in state and federal courts for DNA testing in order to exonerate Michael Morton, an innocent man who served 25 years in prison. The resultant landmark Michael Morton Act requires prosecutors to provide defense counsel free access to investigation information.

Raley also was part of the pro bono legal team that helped overturn the murder conviction of Hannah Overton, who was officially declared innocent in 2017.

His efforts have earned him widespread recognition, including the Brazos County Bar Association’s Atticus Finch Award and the Houston Bar Association President’s Award for Pro Bono Service. Raley also was named the 2013 “Houstonian of the Year” by the Houston Chronicle.

He has been featured in or interviewed by CNN, The Texas Tribune, Texas Monthly, The New York Times, The Wall Street Journal, NPR, Katie Couric and 60 Minutes.