Prof. Chris Odinet Authors Book on Housing Crisis of 2008 and Its Lingering Impact 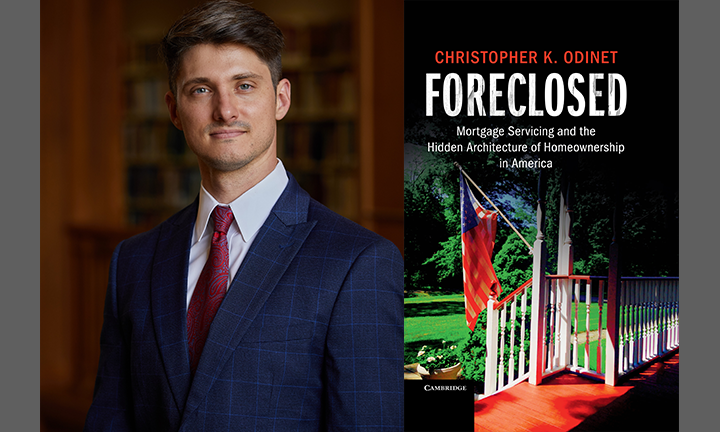 In his new book, Foreclosed: Mortgage Servicing and the Hidden Architecture of Homeownership in America, OU Law Professor Chris Odinet provides a revealing look at the 2008 housing crash and its aftermath – including an analysis of abuses that continue to be inflicted upon homeowners as well as possible solutions.

In Foreclosed, Professor Odinet reveals the powerful and often invisible mortgage servicing industry, the tremendous discretionary power it wields over the housing lives of most Americans, and the servicing problems that still persist today. In doing so, it unveils a quiet and dangerous market shift in mortgage servicing – namely, an ongoing move toward a shadow banking sector where regulation is weak – that threatens the stability of our housing finance system. Ultimately, the book demonstrates how the law does not afford homeowners the protection most think and how regulation of these mortgage middlemen remains weak.

“I wrote this book because I felt that there was a story that needed to be told – one that pulls back the curtain on the cloudy world of mortgage servicers and the ways they can help and hurt homeowners in times of financial distress,” Odinet said. “I also think this book’s publication comes at an interesting time because we’re living through a deregulatory period. That’s dangerous when one considers that the financial crisis – a mere 10 years ago – was largely driven by regulatory failures.”

“An eye-opening and heart-stopping analysis of the role mortgage servicers played in the housing crisis. Odinet reveals the continuing abuses inflicted upon homeowners by this hidden sector of the economy and proposes appropriate regulation. Beautifully written, supported by evidence, and carefully argued – this book is a masterpiece.” Joseph William Singer - Bussey Professor of Law, Harvard Law School

“As the collapse of the housing market in 2008 starts to recede from view, we seem all too eager to ignore the lessons we should have learned. Christopher K. Odinet’s book explores the largely invisible world of mortgage servicers. They are the primary point of contact between borrowers and lenders, and yet people seldom understand the role they play and power they have. Odinet shows how mortgage servicers exacerbated the devastating effects of the housing crash, and continue to this day to displace people from their homes without any meaningful legal oversight. It is an astonishing story, and one that demands the kind of care that he brings to the problem.”  Christopher Serkin - Professor of Law, Vanderbilt University

“Odinet brilliantly exposes the murky world of mortgage servicers – middlemen with immense power and little oversight by others. The labyrinthine securitization process, shadow banks, negligence, and outright fraud and abuse by mortgage servicers have contributed to the distress of property owners and the disregard of their interests. This area calls out for consumer protection. In a compelling book, Odinet tells us why.”  Laura S. Underkuffler - J. DuPratt White Professor of Law, Cornell University

Professor Odinet is a national expert on real estate law, mortgage finance, and consumer protection. His primary teaching and research interests focus on commercial law, consumer transactions, and property law. His current work centers on the intersection of law, credit, and technology, with a specific emphasis on financial technology (fintech) innovations in lending. View his scholarship here.