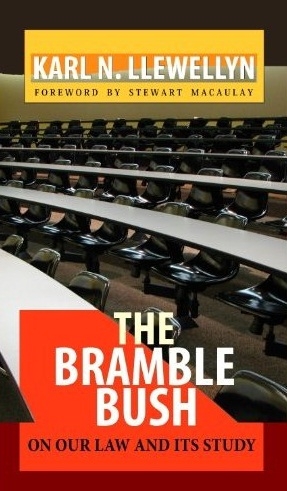 First written more than 80 years ago, The Bramble Bush: On Our Law and Its Study by Karl N. Llewellyn continues to remain relevant in today’s legal education environment. Anyone who has graduated from law school in the U.S. since the 1930s has probably at least heard of The Bramble Bush, if not studied it in preparation for law school.

Stewart Macaulay, a senior professor of law at the University of Wisconsin, who authored the foreword for the most recent edition, discussed at length the work of OU Law Professor Judith Maute. He highlights her work, a historical reconstruction of Peevyhouse v. Garland Coal & Mining Co., first published in Northwestern University Law Review.

“We [law professors] also make great efforts to put the appellate opinions in context, to tell students about the dispute between consequences of what happened before courts. The work of Professor Judith Maute offers a rich example. She advocates this kind of ‘legal archaeology’ because it will often take our students and us away from abstraction and force us to confront basic questions of justice.

Professor Maute’s study is but one of many attempts to put tort appellate opinions into context. I think that it helps at least some law students learn the new language that they are being taught without losing their ability to see many of its consequences and judge them normatively. I see no reason why one cannot learn a new language without forgetting everything about her native tongue”

The book’s first edition was a collection of different introductory lectures that the author gave to his new law students at Columbia University. The book is highly recommended for students to read when considering law school, before beginning, or early in their first year. It provides students with an introduction to what law is and how to prepare for class. The text also provides perspectives about the practice of law in relation to how it affects one’s life.

Llewellyn’s lectures of law, legal reasoning and exam-taking skills continue to be influential, making The Bramble Bush a classic passed down through generations since its emergence.  It remains to be one of the most popular and most recommended introductions to the study of law and its study, and this latest edition shines a national spotlight on Professor Maute’s scholarship.