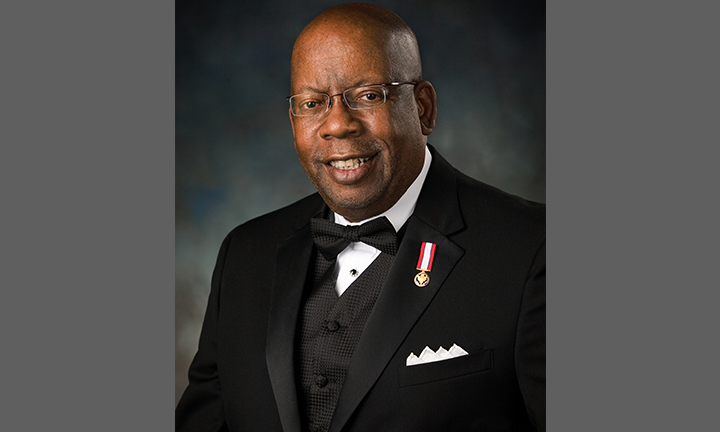 Stan Evans, Assistant Dean and former Dean of Students at OU Law, was honored with the Rita Washington Lifetime Service Achievement Award at the 2019 Juneteenth Music and Arts Festival in Oklahoma City.

The award is presented by Perry Publishing and Broadcasting to a person who has a commitment to service and an extended record of successes in helping others. The lifetime achievement award is named in memory of Rita Washington, a longtime administrator with Perry Enterprises who lived a life of service and was a mentor to many.

Evans grew up in Oklahoma City. When he was 11 years old, he participated in Clara Luper’s Sit-In Movement, which successfully prompted Oklahoma City restaurants to overturn their policies of segregation.

He and his wife, Saundra, returned to Oklahoma City in 2000, when he enrolled in the OU College of Law. Upon his graduation in 2003, he was selected by Deans Coats and Harroz to stay at the college serving as its Dean of Students, helping to develop a diverse body of lawyers who would be sensitive to the needs of the people of the state and nation. In this role, he has mentored and guided hundreds of young lawyers who now practice law throughout Oklahoma and the nation.

During his tenure, OU Law achieved remarkable progress, particularly in initiatives aimed at increasing diversity and encouraging minority success. In one year, first-year minority student numbers jumped from 16% to 28%. During his tenure, OU Law achieved a 100% minority bar passage rate three times and an overall bar passage rate of 97% twice. The minority and overall retention rates at the college stayed above 94% his entire tenure. In 2009, OU Law was named one of the top 20 law schools for diversity experience by U.S. News & World Report. Although he retired from his full-time position at OU Law in 2012, he continues to serve the college as assistant dean, acting as a mentor, adviser and recruiter.

Evans also maintained a focus on his community. He is one of the founders of the MAKE-A-WILL and Family Financial Planning Program, which, in the last 11 years, has helped over 800 families with financial planning and wealth management. Each April, 40 pro bono lawyers and 40 pro bono law students from OCU and OU provide free wills, trusts, advance directives, and other key documents to families who would not otherwise be able to have them.

Evans also manages a program where OU Law students return to Oklahoma elementary schools to mentor students who have not been exposed to the opportunities that can be opened up to them.

He is one of the founders of the Oklahoma Bar Association’s Oklahoma Lawyers for America’s Heroes Program, which now has 712 volunteer lawyers who provide free legal services to veterans, deployed Oklahoma soldiers and their families.

Evans was appointed by two governors to the Oklahoma Human Rights Commission. As chairman, he provided oversight of two state investigative offices, energized the entire state on human rights awareness, and sought recognition for people who have been giants in this important area of Oklahoma history.

In honor of his lifelong commitment to serving others, in 2019 he was inducted into the OU College of Law’s Order of the Owl Hall of Fame.

Juneteenth is an annual celebration of the freeing of the slaves in the south at the end of the Civil War. The celebration started in Texas and is now a nationwide event held annually around June 19. It is an officially recognized holiday in over 30 states. While stationed in Alaska, Evans was one of the originators of the celebration in that state and has spoken at Juneteenth programs many times.