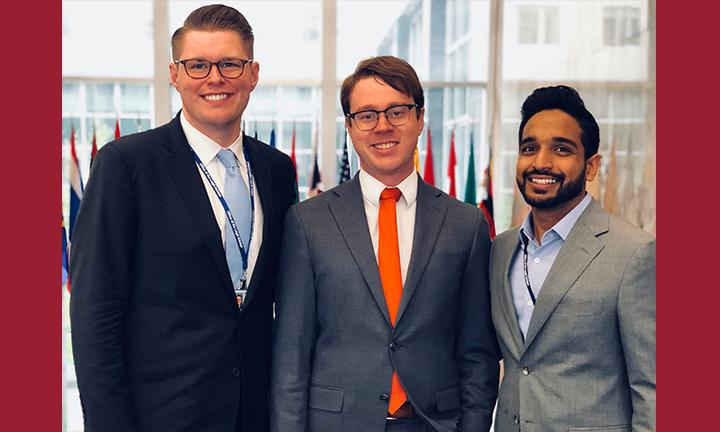 For their final semester at OU Law, 3Ls Jason Bollinger, Ryan Geary, and Adnan Qazi had the opportunity to live in Washington, D.C., and work in the Office of the Legal Adviser, Office of International Claims and Investment Disputes at the U.S. Department of State.

The Office of International Claims and Investment Disputes is the largest office within the State Department’s Legal Bureau and handles a wide range of investor-state disputes arising under NAFTA, CAFTA-DR, and a variety of bilateral investment treaties and free trade agreements. Additionally, the office represents the U.S. government and coordinates the United States’ defense in all international claims against the U.S. government.

The majority of Jason’s, Ryan’s, and Adnan’s work this semester involved assisting with litigation preparation for the United States’ hearings at the Iran-U.S. Claims Tribunal in The Hague, The Netherlands. The United States is currently involved in a multi-part foreign military sales dispute with Iran, and in addition to conducting research on various issues for the United States’ defense, the three provided round-the-clock litigation support to the U.S. delegation in The Hague while hearings were taking place in February. Jason will be traveling with the U.S. delegation to The Hague this month for the next round of hearings.

In addition to their work on the Iran-U.S. Claims Tribunal case, Jason evaluated and prepared the U.S. government’s response to a multi-million dollar tort claim against the Department of State, Ryan helped formulate the U.S. submission to a multi-million dollar investment dispute between U.S. nationals and the Dominican Republic, and Adnan assisted with expropriation issues under CAFTA involving property in Costa Rica.

The three also had the chance to witness history while working at the Department of State. They attended the swearing-in of Jennifer Newstead, the first female Legal Adviser to the Secretary of State (who was sworn-in by Supreme Court Justice Stephen Breyer), attended the confirmation hearings of Secretary of State Mike Pompeo, attended oral argument at the U.S. Court of Appeals for the Federal Circuit on a case involving the state sponsor of terrorism exception to the Foreign Sovereign Immunities Act, and witnessed the state visit of French President Emmanuel Macron.

Jason, Ryan, and Adnan would like to express their sincere appreciation to Hartzog Conger Cason & Neville, the OU Foundation, and Professor Evelyn Aswad for making their time in D.C. possible. The State Department’s Legal Bureau is known throughout the government and the international community as the “best international law firm in the world,” and without the support of OU Law and its donors, the opportunity to work in the office would not be possible.

OU Law currently has the largest presence of any law school in the Office of International Claims and Investment Disputes, and the attorneys in the office frequently comment on how impressed they are with the exceptional students who come from OU.