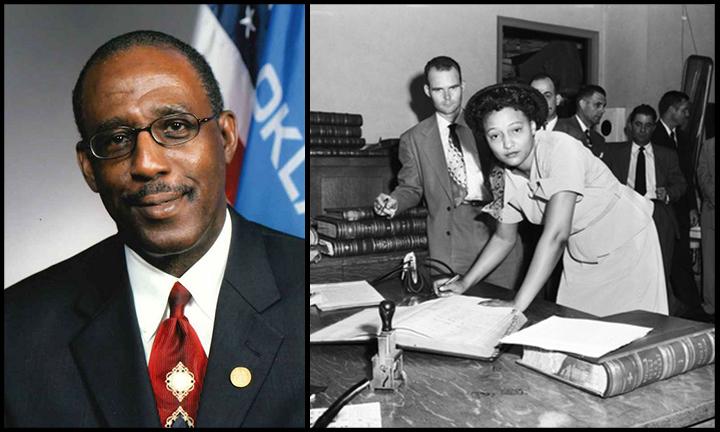 Two alumni of the University of Oklahoma College of Law were inducted last week into the Oklahoma Hall of Fame. Oklahoma Supreme Court Justice Tom Colbert (OU Law ’83) and Ada Lois Sipuel Fisher (OU Law ’51) were part of the 90th Hall of Fame class. Fisher, who died in 1995, was inducted posthumously.

Read more about the honor here.

After graduating from Sapulpa High School, Colbert went on to earn degrees from Eastern Oklahoma State College and Kentucky State University before serving in the United States Army and its Criminal Investigation Division. While at KSU, Colbert was named All-Conference in track and field for the long jump and triple jump and All-American in track and field for the long jump. Following an honorable discharge, he resumed his formal education and earned a masters of education degree at Eastern Kentucky University. He taught middle school students in inner-city Chicago and served as a recreation specialist for a local boys’ club.

Returning home to Oklahoma, he earned his juris doctorate from the University of Oklahoma before accepting the position of Assistant Dean at Marquette University Law School. He served as an Assistant District Attorney for Oklahoma County before entering private practice. During this time he also served as an attorney for the Department of Human Services.

A graduate of Langston University, Fisher dreamed of being a lawyer. However, Langston did not have a law school and at that time state statutes prohibited blacks from attending white state universities. At the urging of the NAACP, 21-year-old Fisher agreed to seek admission to the University of Oklahoma's law school and challenge Oklahoma's segregation laws.

Her application was denied. Not because of her academic credentials, but because of her race. Fisher filed a lawsuit, represented by a young Thurgood Marshall and later U.S. Supreme Court Justice. After losing at the county and state levels, she appealed to the U.S. Supreme Court. The nation's highest tribunal ruled that Oklahoma must provide Fisher with the same opportunities for securing a legal education as it provided to other citizens.

Rather than admitting Fisher to OU, the Oklahoma Legislature created a Langston University School of Law in the Senate rooms of the Oklahoma State Capitol. Fisher filed a motion contending that the Langston law school did not afford the equal legal education as that of OU. Although the county and state courts upheld that the two were “equal,” after learning of Fisher’s intent to again appeal to the U.S. Supreme Court, the Oklahoma Attorney General conceded and Fisher was admitted to the University of Oklahoma, more than three years after her initial application. Langston’s law school closed 12 days later.

Fisher graduated from the OU College of Law and earned a master’s degree in history. After practicing law in Chickasha, she joined the faculty at Langston University. She retired 30 years later as assistant vice president of academic affairs. In 1991, the University of Oklahoma awarded Fisher an honorary doctorate of humane letters.